In a network system, a rate limiter is used to control the rate of traffic sent by a client or a service. In the HTTP world, a rate limiter limits the number of client requests allowed to be sent over a specified period. If the API request count exceeds the threshold defined by the rate limiter, all the excess calls are blocked. Here are a few examples:

In this chapter, you are asked to design a rate limiter. Before starting the design, we first look at the benefits of using an API rate limiter:

Rate limiting can be implemented using different algorithms, each with its pros and cons. The interactions between an interviewer and a candidate help to clarify the type of rate limiters we are trying to build.

Candidate: Does the rate limiter throttle API requests based on IP, the user ID, or other properties? Interviewer: The rate limiter should be flexible enough to support different sets of throttle rules.

Candidate: What is the scale of the system? Is it built for a startup or a big company with a large user base?Interviewer: The system must be able to handle a large number of requests.

Candidate: Will the system work in a distributed environment? Interviewer: Yes.

Candidate: Is the rate limiter a separate service or should it be implemented in application code? Interviewer: It is a design decision up to you.

Candidate: Do we need to inform users who are throttled? Interviewer: Yes.

Here is a summary of the requirements for the system:

Let us keep things simple and use a basic client and server model for communication.

Where to put the rate limiter?

Intuitively, you can implement a rate limiter at either the client or server-side.

Besides the client and server-side implementations, there is an alternative way. Instead of putting a rate limiter at the API servers, we create a rate limiter middleware, which throttles requests to your APIs as shown in Figure 4-2.

Let us use an example in Figure 4-3 to illustrate how rate limiting works in this design. Assume our API allows 2 requests per second, and a client sends 3 requests to the server within a second. The first two requests are routed to API servers. However, the rate limiter middleware throttles the third request and returns a HTTP status code 429. The HTTP 429 response status code indicates a user has sent too many requests.

While designing a rate limiter, an important question to ask ourselves is: where should the rater limiter be implemented, on the server-side or in a gateway? There is no absolute answer. It depends on your company’s current technology stack, engineering resources, priorities, goals, etc. Here are a few general guidelines:

Rate limiting can be implemented using different algorithms, and each of them has distinct pros and cons. Even though this chapter does not focus on algorithms, understanding them at high-level helps to choose the right algorithm or combination of algorithms to fit our use cases. Here is a list of popular algorithms:

The token bucket algorithm is widely used for rate limiting. It is simple, well understood and commonly used by internet companies. Both Amazon and Stripe use this algorithm to throttle their API requests. 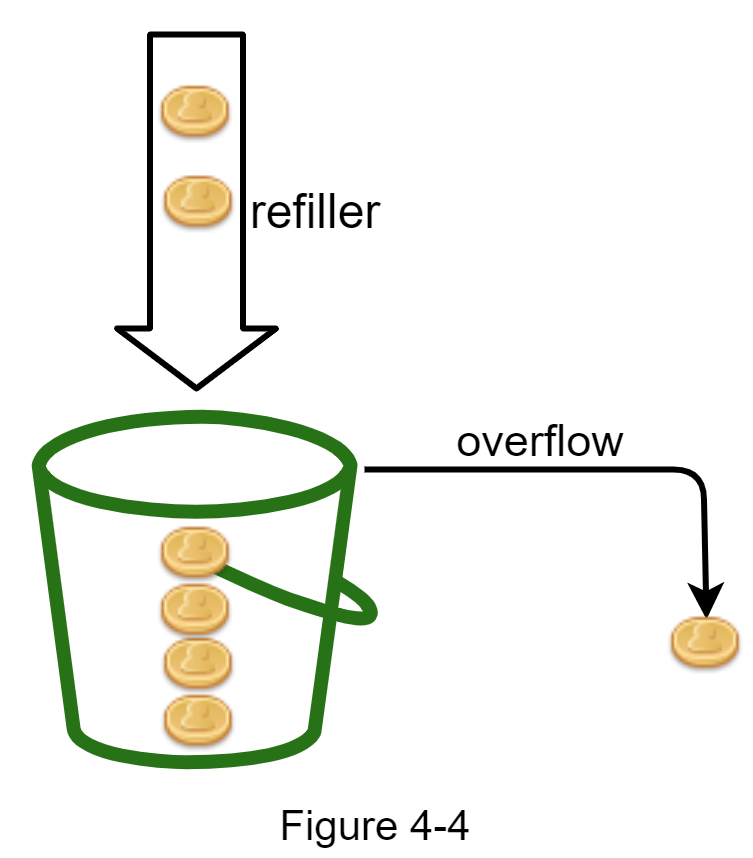 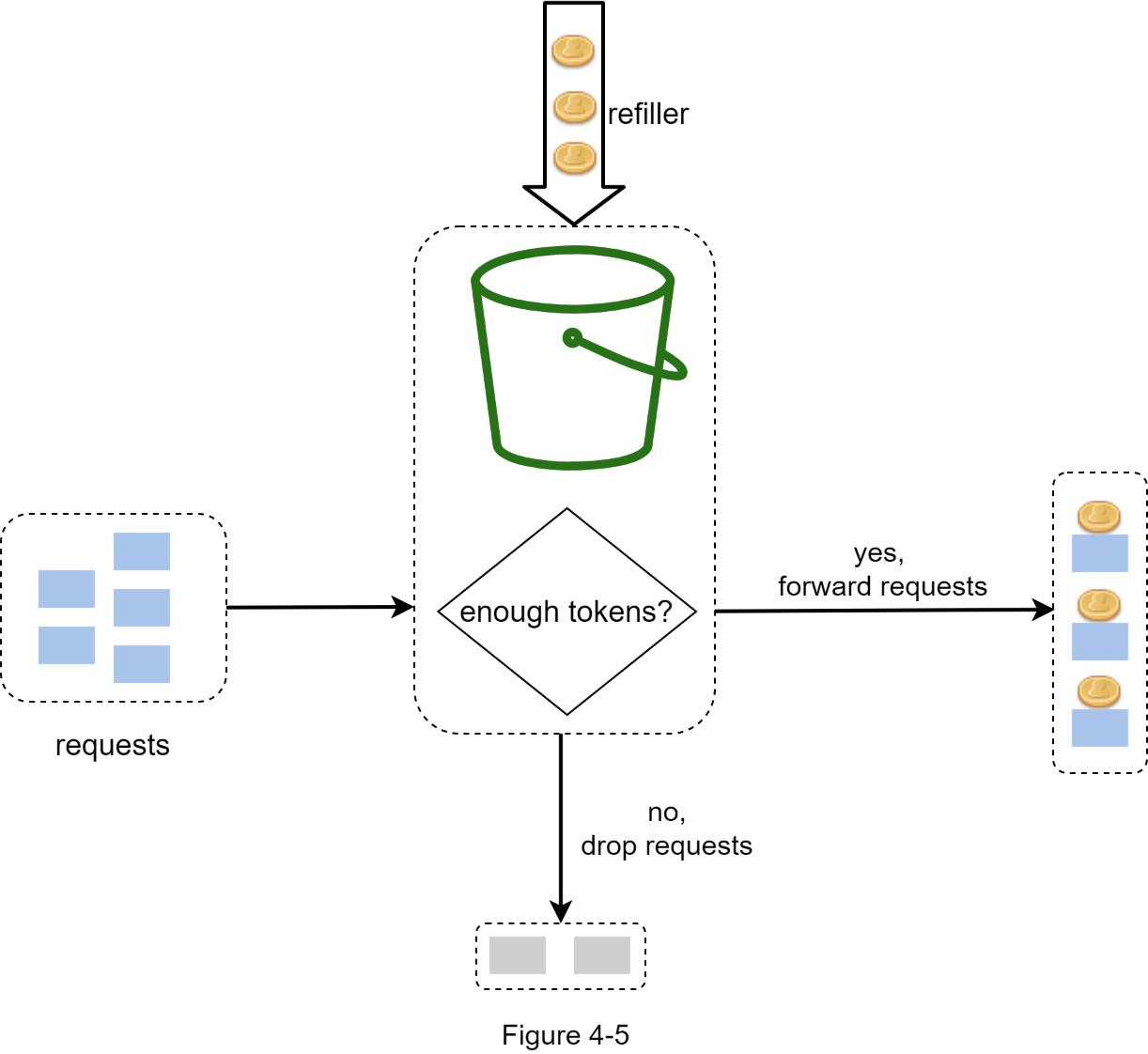 Figure 4-6 illustrates how token consumption, refill, and rate limiting logic work. In this example, the token bucket size is 4, and the refill rate is 4 per 1 minute. 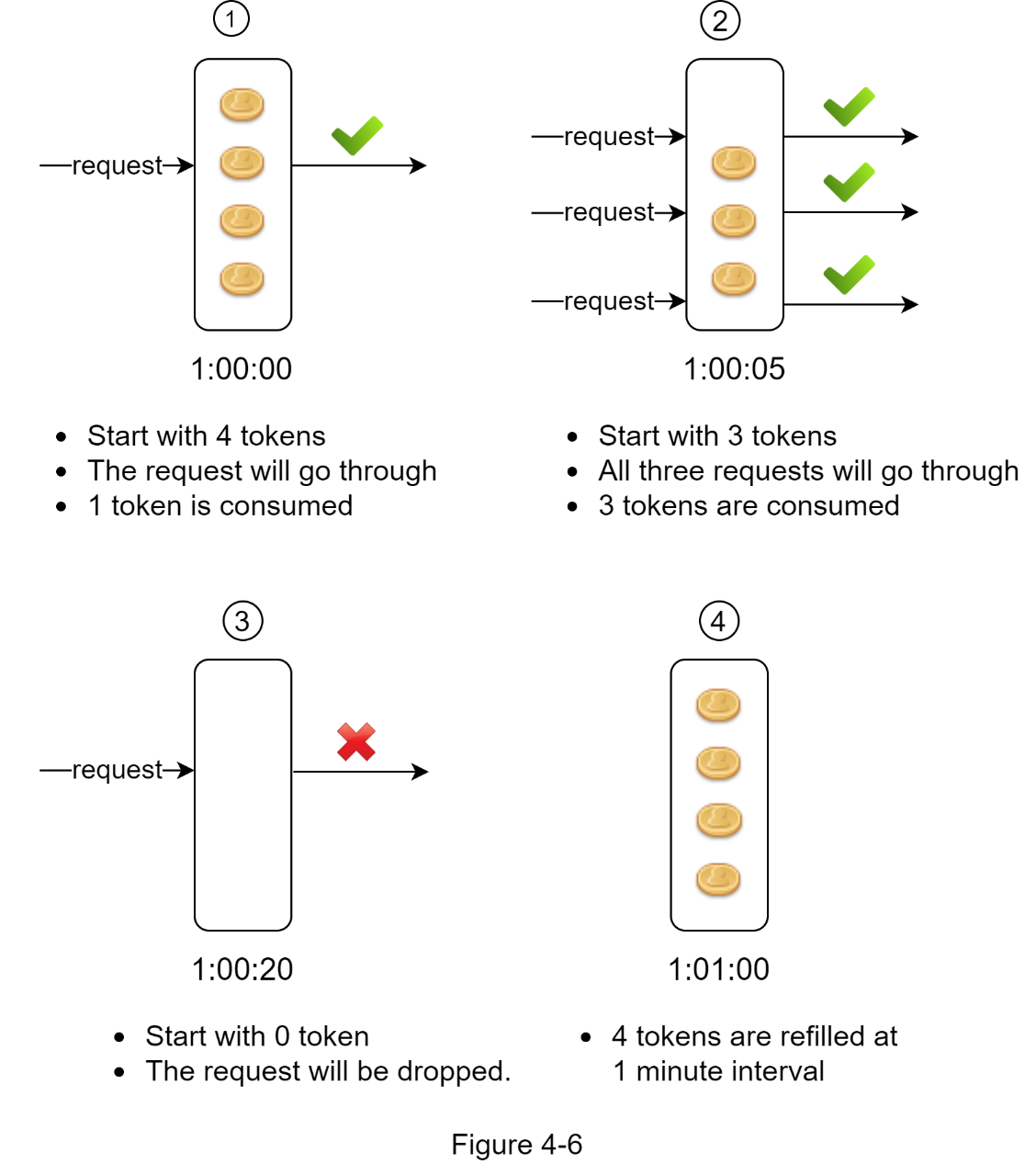 How many buckets do we need? This varies, and it depends on the rate-limiting rules. Here are a few examples.

The leaking bucket algorithm is similar to the token bucket except that requests are processed at a fixed rate. It is usually implemented with a first-in-first-out (FIFO) queue. The algorithm works as follows:

Figure 4-7 explains how the algorithm works.

Let us use a concrete example to see how it works. In Figure 4-8, the time unit is 1 second and the system allows a maximum of 3 requests per second. In each second window, if more than 3 requests are received, extra requests are dropped as shown in Figure 4-8. 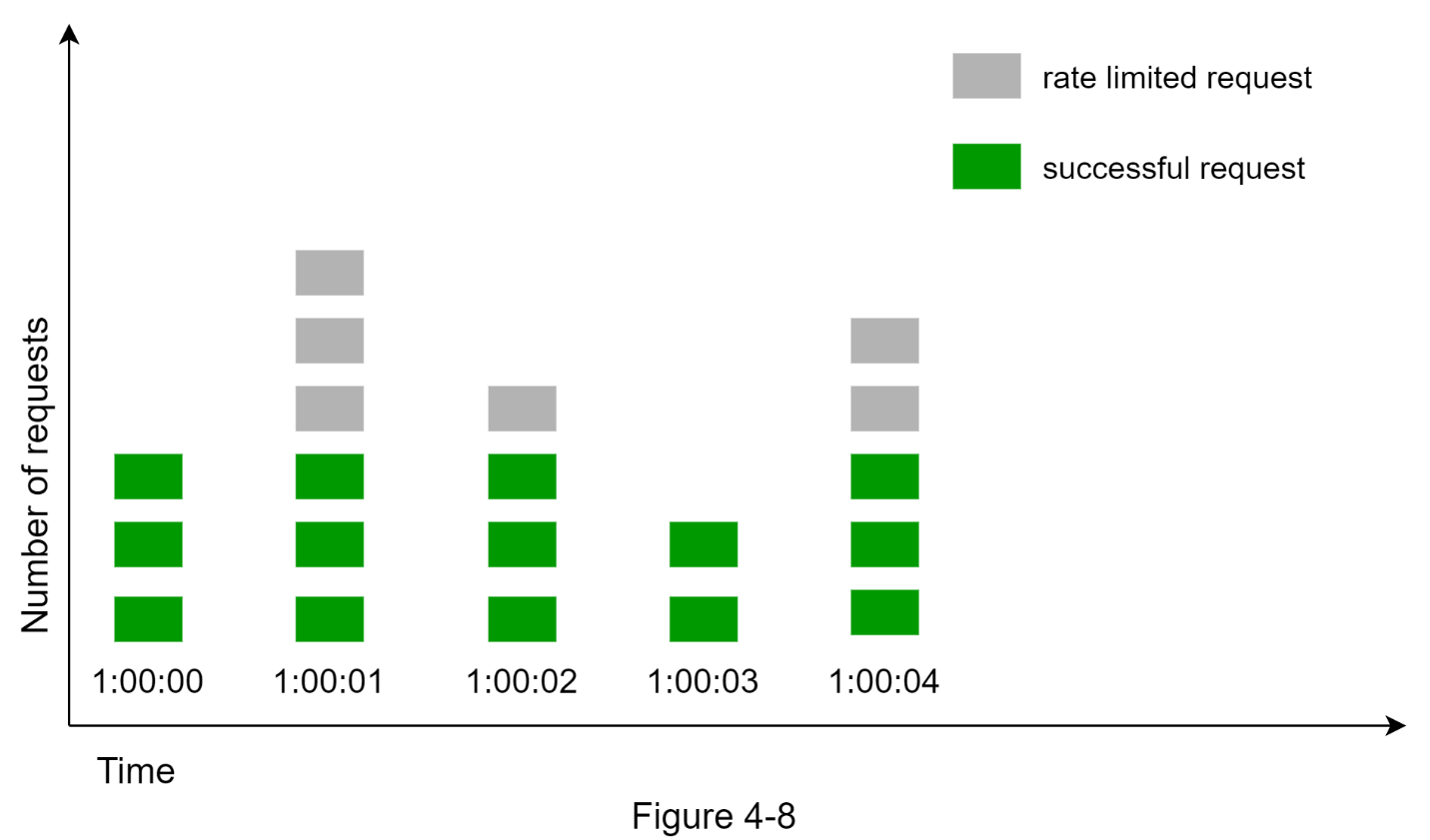 A major problem with this algorithm is that a burst of traffic at the edges of time windows could cause more requests than allowed quota to go through. Consider the following case:

As discussed previously, the fixed window counter algorithm has a major issue: it allows more requests to go through at the edges of a window. The sliding window log algorithm fixes the issue. It works as follows:

We explain the algorithm with an example as revealed in Figure 4-10. 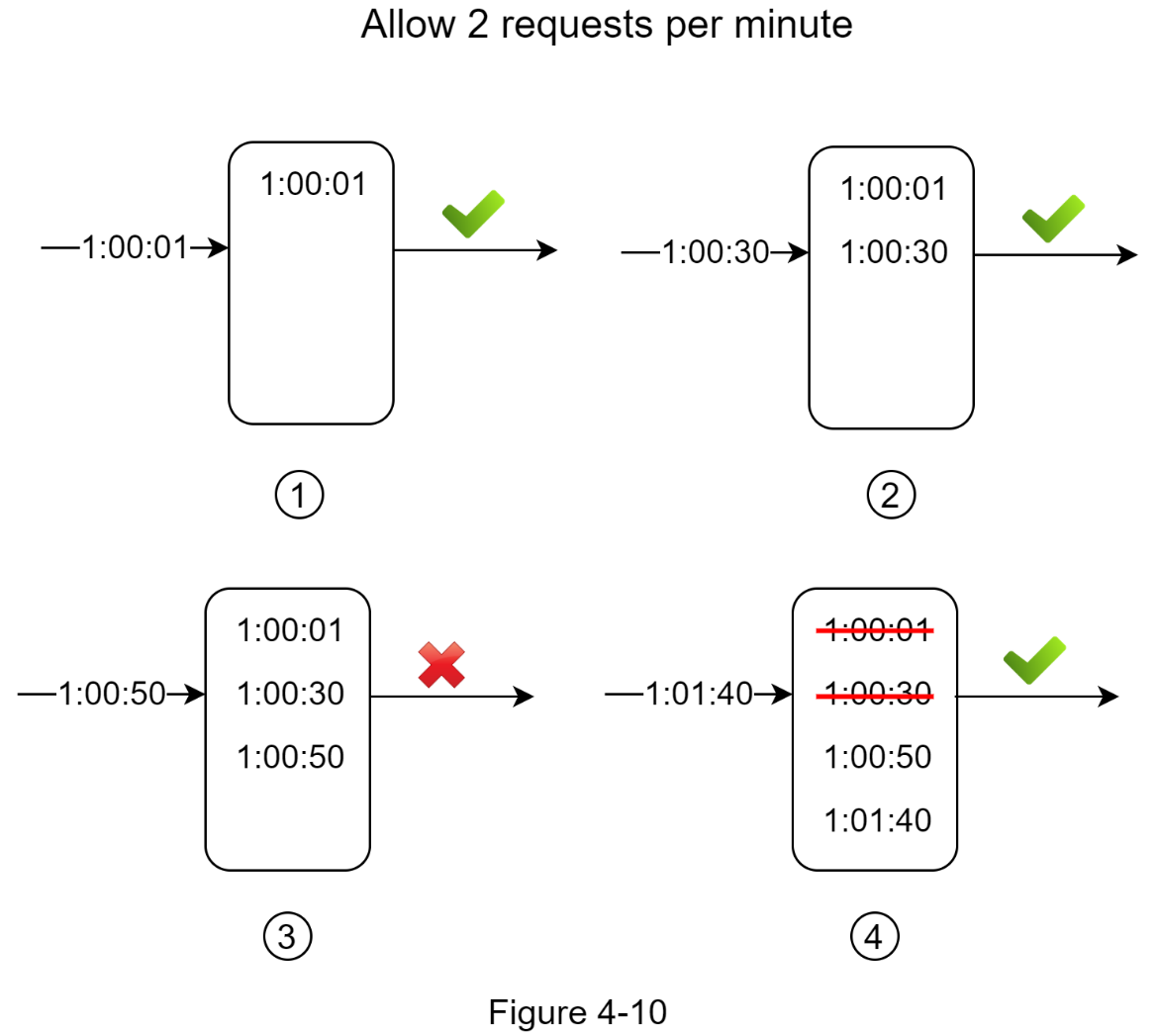 In this example, the rate limiter allows 2 requests per minute. Usually, Linux timestamps are stored in the log. However, human-readable representation of time is used in our example for better readability. 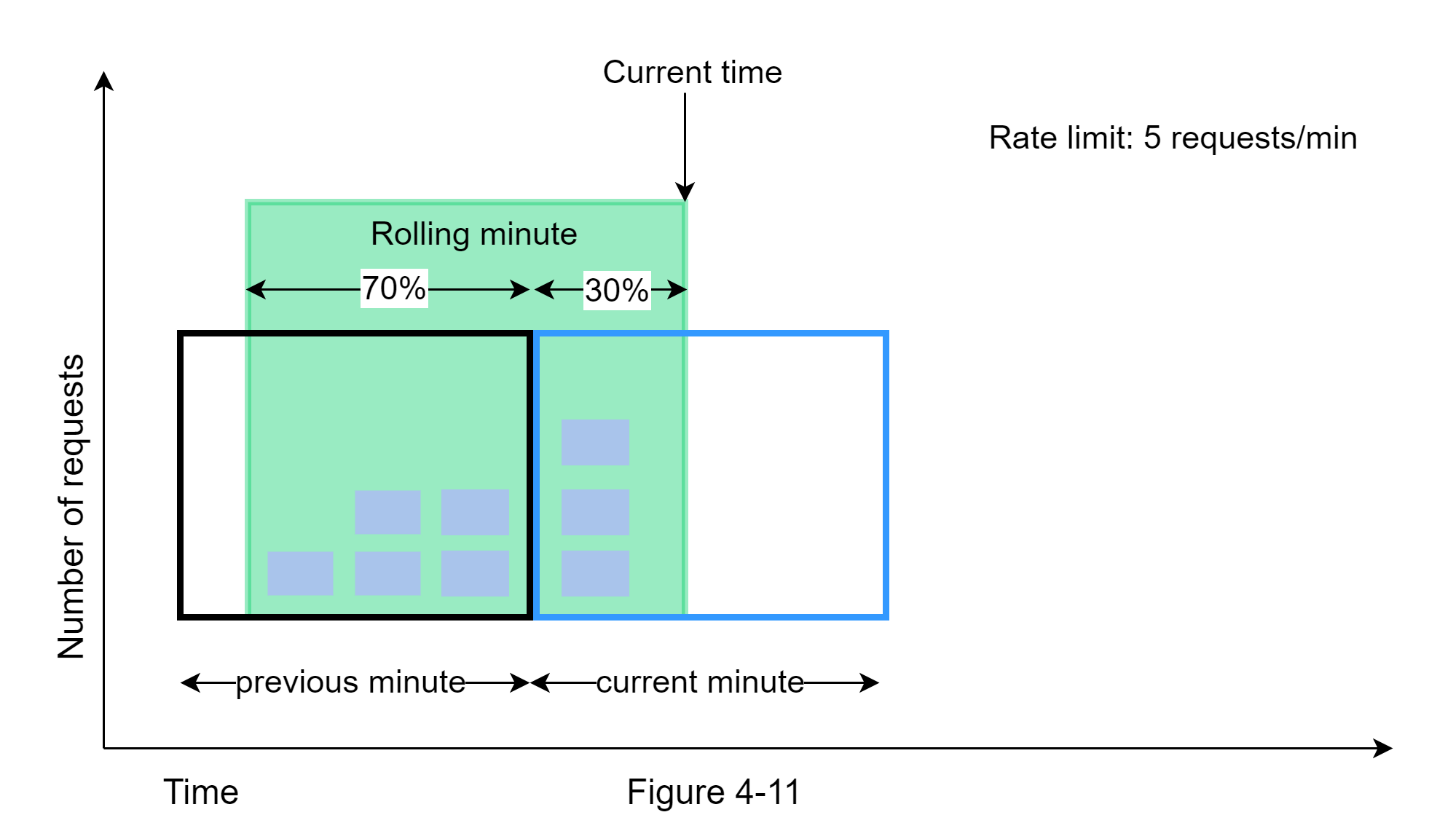 Since the rate limiter allows a maximum of 7 requests per minute, the current request can go through. However, the limit will be reached after receiving one more request.

Due to the space limitation, we will not discuss the other implementation here. Interested readers should refer to the reference material. This algorithm is not perfect. It has pros and cons.

The basic idea of rate limiting algorithms is simple. At the high-level, we need a counter to keep track of how many requests are sent from the same user, IP address, etc. If the counter is larger than the limit, the request is disallowed.

Where shall we store counters? Using the database is not a good idea due to slowness of disk access. In-memory cache is chosen because it is fast and supports time-based expiration strategy. For instance, Redis is a popular option to implement rate limiting. It is an in-memory store that offers two commands: INCR and EXPIRE.

Figure 4-12 shows the high-level architecture for rate limiting, and this works as follows:

The high-level design in Figure 4-12 does not answer the following questions:

In this section, we will first answer the questions regarding rate limiting rules and then go over the strategies to handle rate-limited requests. Finally, we will discuss rate limiting in distributed environment, a detailed design, performance optimization and monitoring.

Lyft open-sourced their rate-limiting component. We will peek inside of the component and look at some examples of rate limiting rules:

In the above example, the system is configured to allow a maximum of 5 marketing messages per day. Here is another example:

This rule shows that clients are not allowed to login more than 5 times in 1 minute. Rules are generally written in configuration files and saved on disk.

X-Ratelimit-Remaining: The remaining number of allowed requests within the window.

X-Ratelimit-Limit: It indicates how many calls the client can make per time window.

X-Ratelimit-Retry-After: The number of seconds to wait until you can make a request again without being throttled.

Figure 4-13 presents a detailed design of the system. 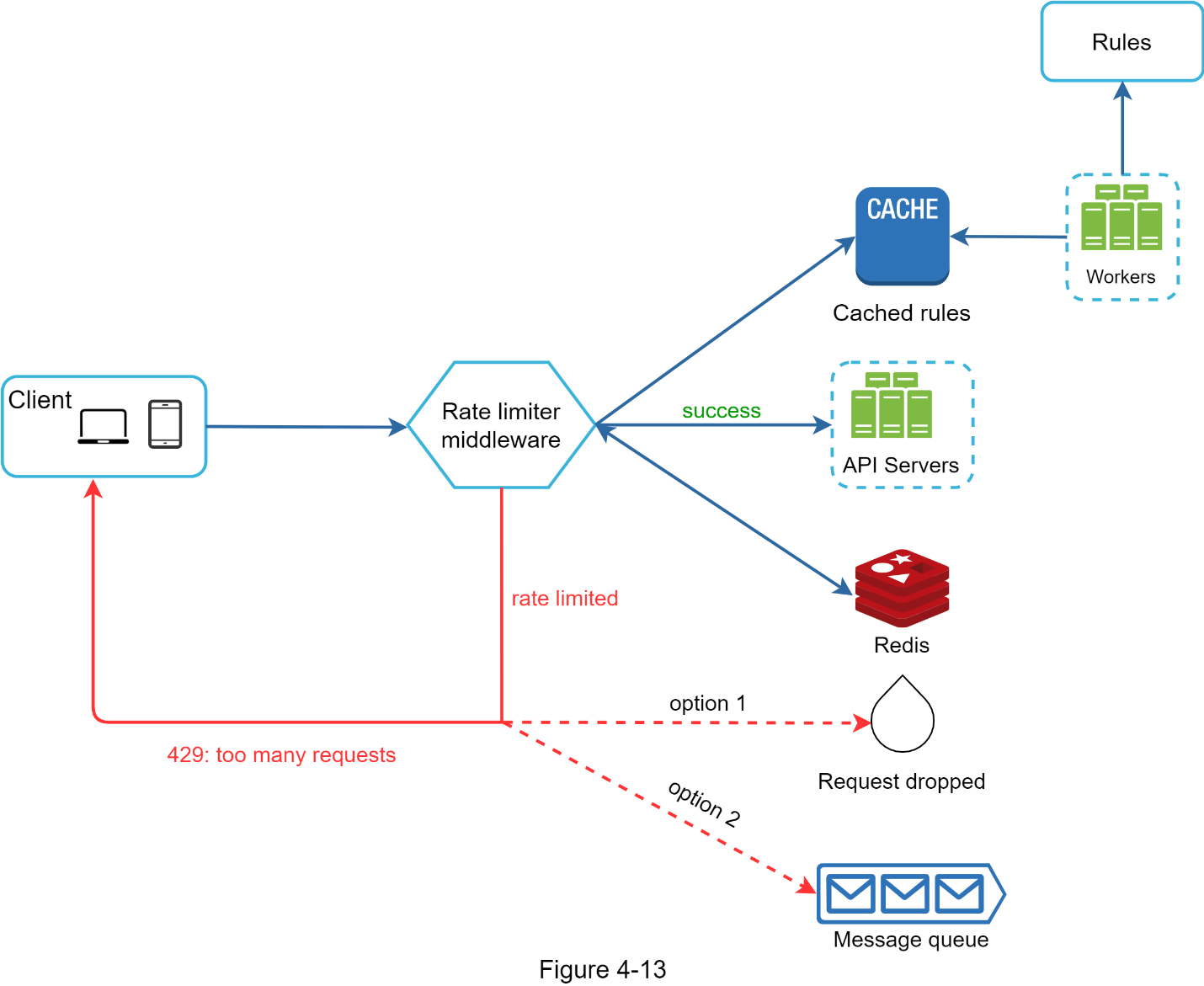 Rate limiter in a distributed environment

Building a rate limiter that works in a single server environment is not difficult. However, scaling the system to support multiple servers and concurrent threads is a different story. There are two challenges:

As discussed earlier, rate limiter works as follows at the high-level:

Race conditions can happen in a highly concurrent environment as shown in Figure 4-14. 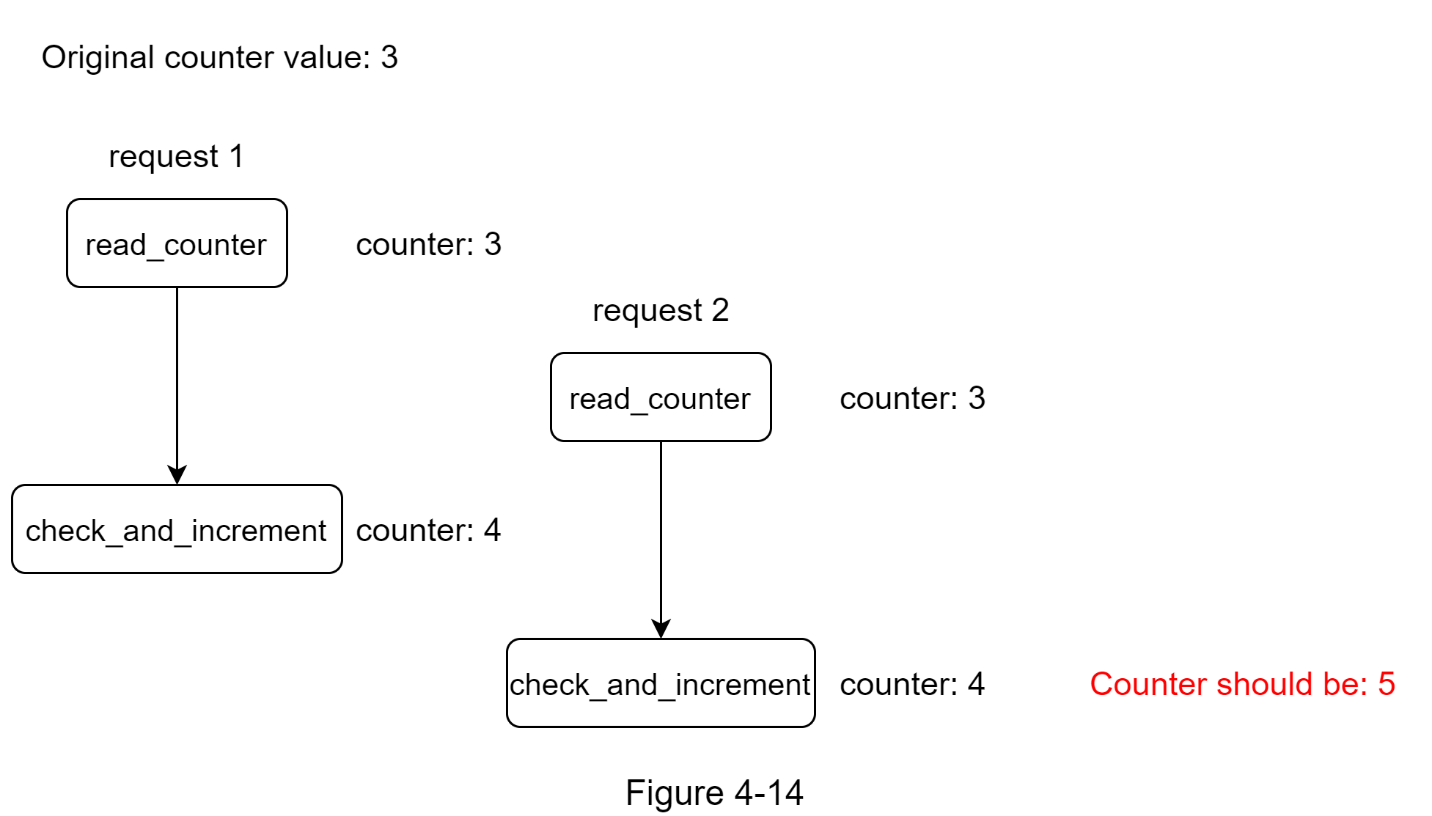 Locks are the most obvious solution for solving race condition. However, locks will significantly slow down the system. Two strategies are commonly used to solve the problem: Lua script and sorted sets data structure in Redis 8. For readers interested in these strategies, refer to the [corresponding reference materials ][8,13].

One possible solution is to use sticky sessions that allow a client to send traffic to the same rate limiter. This solution is not advisable because it is neither scalable nor flexible. A better approach is to use centralized data stores like Redis. The design is shown in Figure 4-16.

Performance optimization is a common topic in system design interviews. We will cover two areas to improve.

First, multi-data center setup is crucial for a rate limiter because latency is high for users located far away from the data center. Most cloud service providers build many edge server locations around the world. For example, as of 5/20 2020, Cloudflare has 194 geographically distributed edge servers. Traffic is automatically routed to the closest edge server to reduce latency. 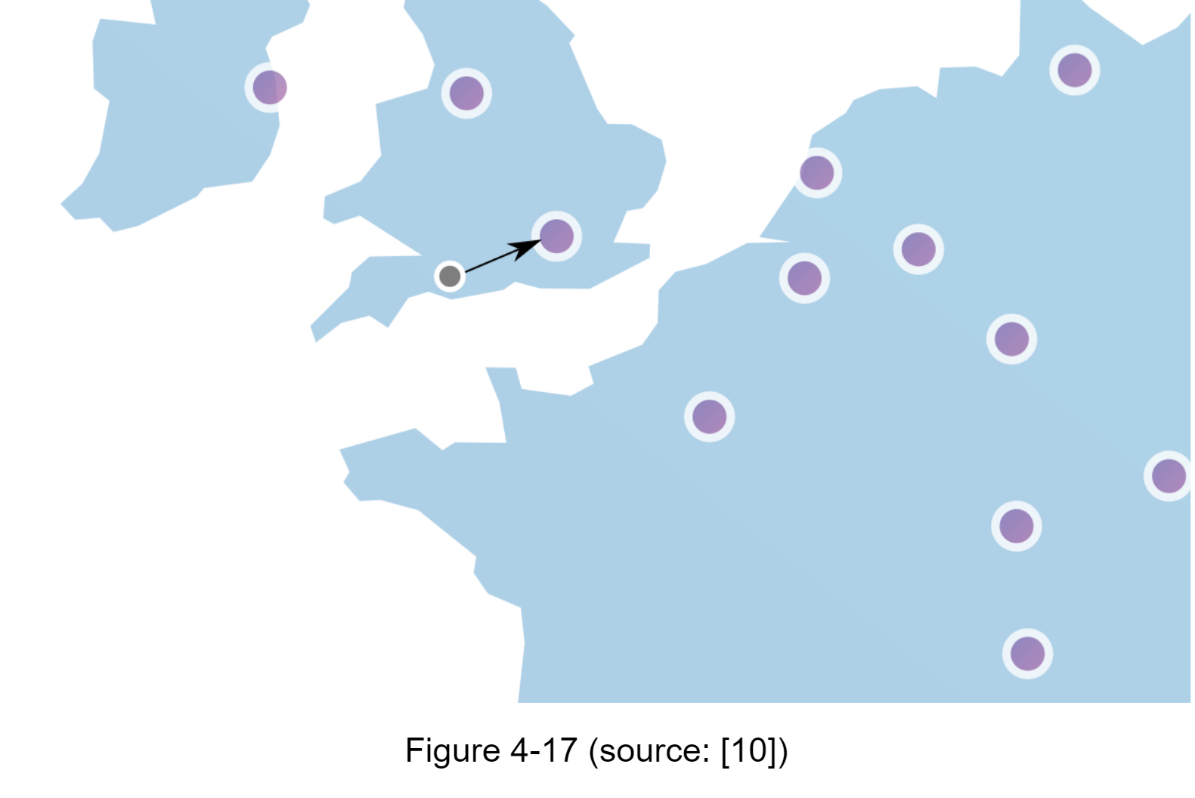 For example, if rate limiting rules are too strict, many valid requests are dropped. In this case, we want to relax the rules a little bit. In another example, we notice our rate limiter becomes ineffective when there is a sudden increase in traffic like flash sales. In this scenario, we may replace the algorithm to support burst traffic. Token bucket is a good fit here.

In this chapter, we discussed different algorithms of rate limiting and their pros/cons. Algorithms discussed include:

Then, we discussed the system architecture, rate limiter in a distributed environment, performance optimization and monitoring. Similar to any system design interview questions, there are additional talking points you can mention if time allows:

Congratulations on getting this far! Now give yourself a pat on the back. Good job!