Keeping a copy of the same data on multiple machines that are connected via a network.

All of the difficulty in replication lies in handling changes to replicated data.

Each node that stores a copy of the database is called a replica. Every write to the database needs to be processed by every replica; otherwise, the replicas would no longer contain the same data.

This is the mode of replication for a lot SQL/No SQL databases as well as distributed message brokers.

Normally, replication is quite fast: most database systems apply changes to followers in less than a second. However, there is no guarantee of how long it might take.

Often, leader-based replication is configured to be completely asynchronous. This means that a write is not guaranteed to be durable, even if it has been confirmed to the client. But asynchronous replication is nevertheless widely used, especially if there are many followers or if they are geographically distributed.

chain replication is a variant of synchronous replication that has been successfully implemented in a few systems such as Microsoft Azure Storage.

Simply copying data files from one node to another is typically not sufficient: clients are constantly writing to the database, and the data is always in flux, so a standard file copy would see different parts of the database at different points in time. The result might not make any sense.

If asynchronous replication is used, the new leader may not have received all the writes from the old leader before it failed. If the former leader rejoins the cluster after a new leader has been chosen, what should happen to those writes? The new leader may have received conflicting writes in the meantime. The most common solution is for the old leader’s unreplicated writes to simply be discarded, which may violate clients’ durability expectations.

Discarding writes is especially dangerous if other storage systems outside of the database need to be coordinated with the database contents.

It could happen that two nodes both believe that they are the leader. This situation is called split brain, and it is dangerous: if both leaders accept writes, and there is no process for resolving conflicts, data is likely to be lost or corrupted.

If the system is already struggling with high load or network problems, an unnecessary failover is likely to make the situation worse, not better.

In the simplest case, the leader logs every write request (statement) that it executes and sends that statement log to its followers.

For a relational database, this means that every INSERT, UPDATE, or DELETE statement is forwarded to followers.

besides writing the log to disk, the leader also sends it across the network to its followers.

When the follower processes this log, it builds a copy of the exact same data structures as found on the leader.

This method of replication is used in PostgreSQL and Oracle.

This kind of replication log is called a logical log, to distinguish it from the storage engine’s (physical) data representation.

A logical log for a relational database is usually a sequence of records describing writes to database tables at the granularity of a row:

An alternative is to use features that are available in many relational databases: triggers and stored procedures.

This inconsistency is just a temporary state—if you stop writing to the database and wait a while, the followers will eventually catch up and become consistent with the leader. For that reason, this effect is known as eventual consistency.

When the lag is so large, the inconsistencies it introduces are not just a theoretical issue but a real problem for applications.

Reading Your Own Writes

In this situation, we need read-after-write consistency, also known as read-your-writes consistency. This is a guarantee that if the user reloads the page, they will always see any updates they submitted themselves. It makes no promises about other users: other users’ updates may not be visible until some later time.

Another complication arises when the same user is accessing your service from multiple devices.

when reading from asynchronous followers is that it’s possible for a user to see things moving backward in time. 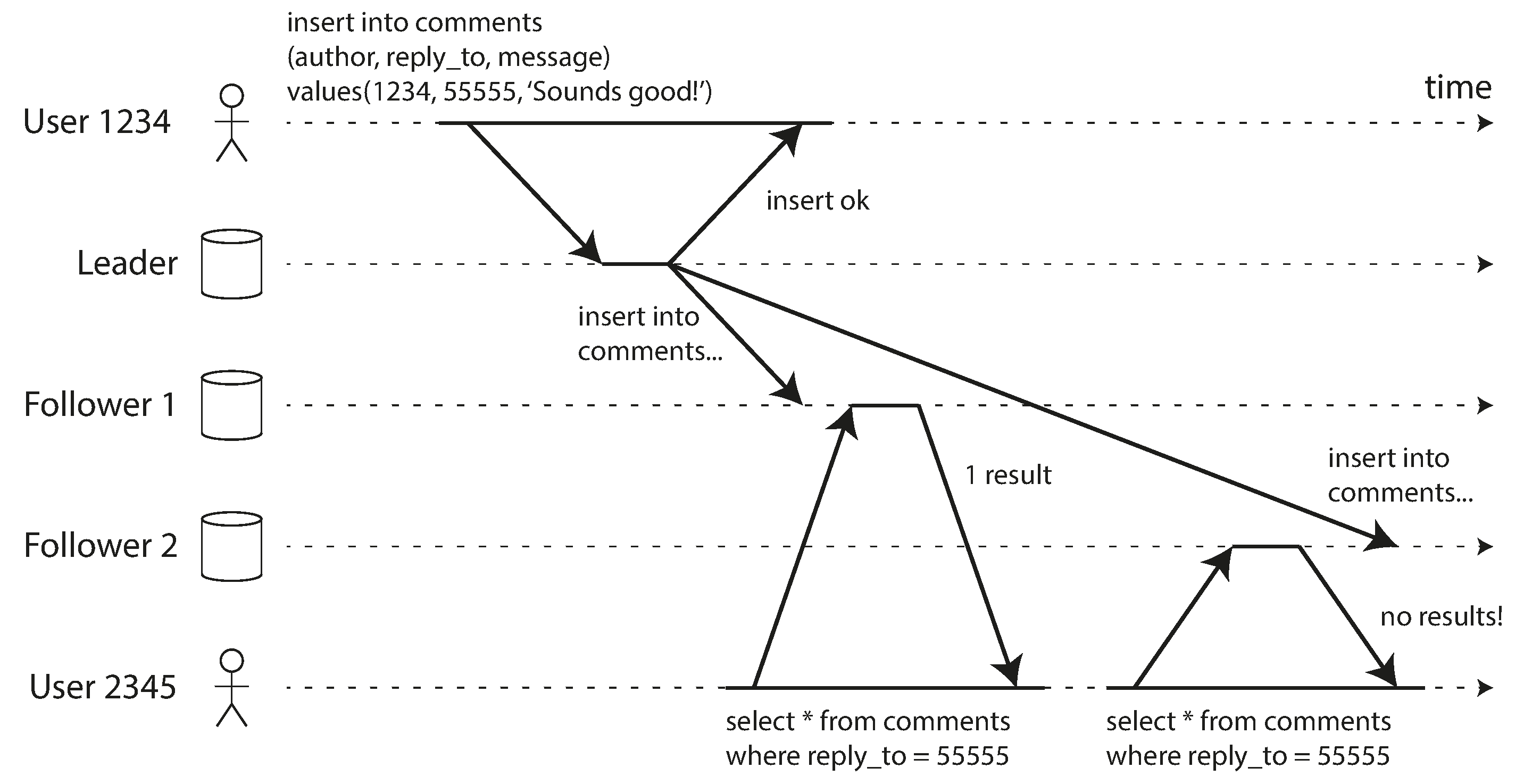 monotonic reads means that if one user makes several reads in sequence, they will not see time go backward.

One way of achieving monotonic reads is to make sure that each user always makes their reads from the same replica. However, if that replica fails, the user’s queries will need to be rerouted to another replica. 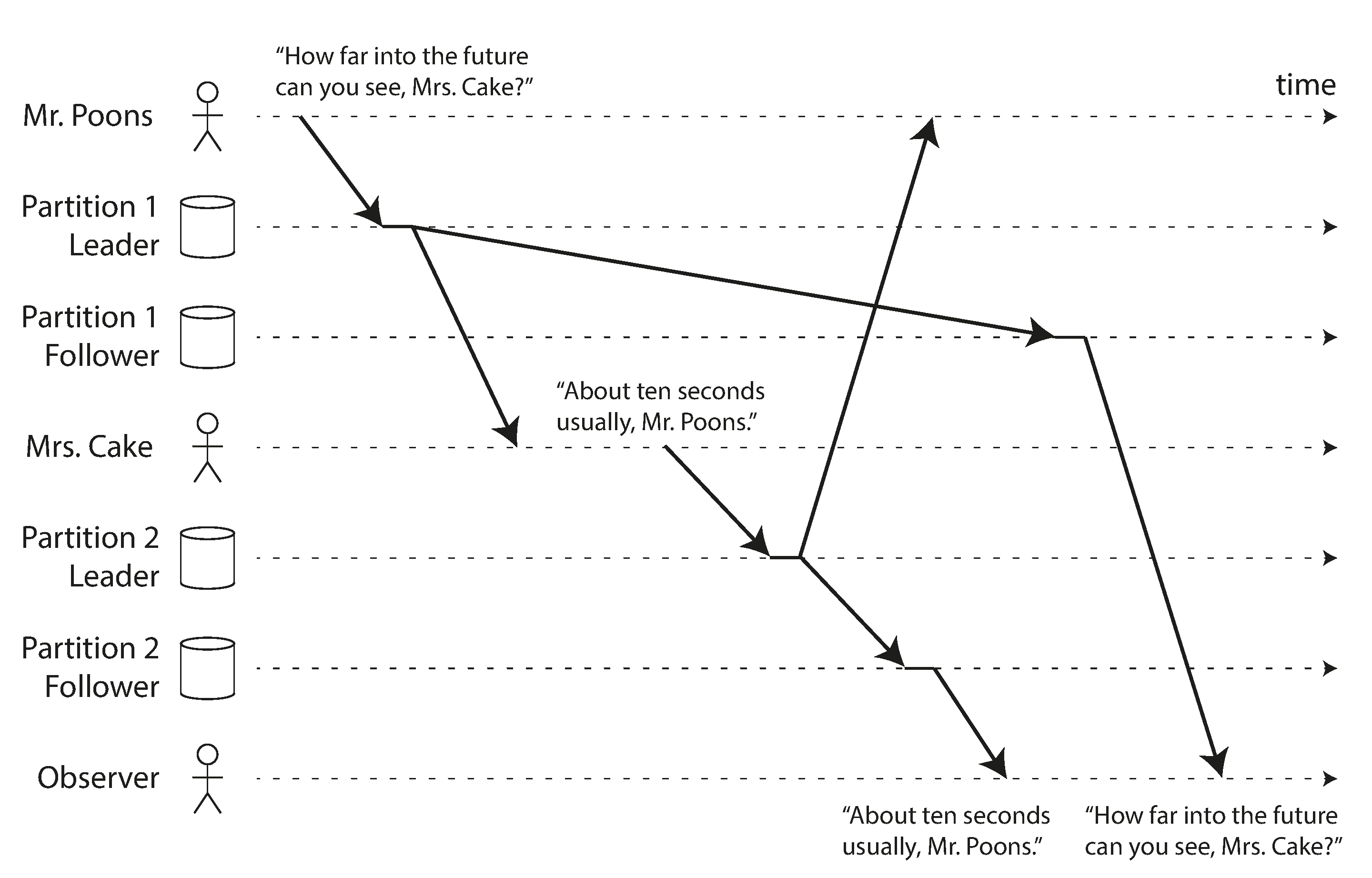 consistent prefix reads guarantee says that if a sequence of writes happens in a certain order, then anyone reading those writes will see them appear in the same order.

One solution is to make sure that any writes that are causally related to each other are written to the same partition—but in some applications that cannot be done efficiently.

A natural extension of the leader-based replication model is to allow more than one node to accept writes. Replication still happens in the same way: each node that processes a write must forward that data change to all the other nodes. We call this a multi-leader configuration (also known as master–master or active/active replication). In this setup, each leader simultaneously acts as a follower to the other leaders.

Use Cases for Multi-Leader Replication

It rarely makes sense to use a multi-leader setup within a single datacenter, because the benefits rarely outweigh the added complexity.

Multi-datacenter operation In a multi-leader configuration, you can have a leader in each datacenter.

Some databases support multi-leader configurations by default, but it is also often implemented with external tools, such as Tungsten Replicator for MySQL, BDR for PostgreSQL, and GoldenGate for Oracle.

As multi-leader replication is a somewhat retrofitted feature in many databases, there are often subtle configuration pitfalls and surprising interactions with other database features. For example, autoincrementing keys, triggers, and integrity constraints can be problematic. For this reason, multi-leader replication is often considered dangerous territory that should be avoided if possible.

Clients with offline operation Another situation in which multi-leader replication is appropriate is if you have an application that needs to continue to work while it is disconnected from the internet.

In this case, every device has a local database that acts as a leader (it accepts write requests), and there is an asynchronous multi-leader replication process (sync) between the replicas of your calendar on all of your devices.

There are tools that aim to make this kind of multi-leader configuration easier. For example, CouchDB is designed for this mode of operation.

Collaborative editing When one user edits a document, the changes are instantly applied to their local replica (the state of the document in their web browser or client application) and asynchronously replicated to the server and any other users who are editing the same document.

If you want to guarantee that there will be no editing conflicts, the application must obtain a lock on the document before a user can edit it. If another user wants to edit the same document, they first have to wait until the first user has committed their changes and released the lock. This collaboration model is equivalent to single-leader replication with transactions on the leader.

However, for faster collaboration, you may want to make the unit of change very small (e.g., a single keystroke) and avoid locking. This approach allows multiple users to edit simultaneously, but it also brings all the challenges of multi-leader replication, including requiring conflict resolution. 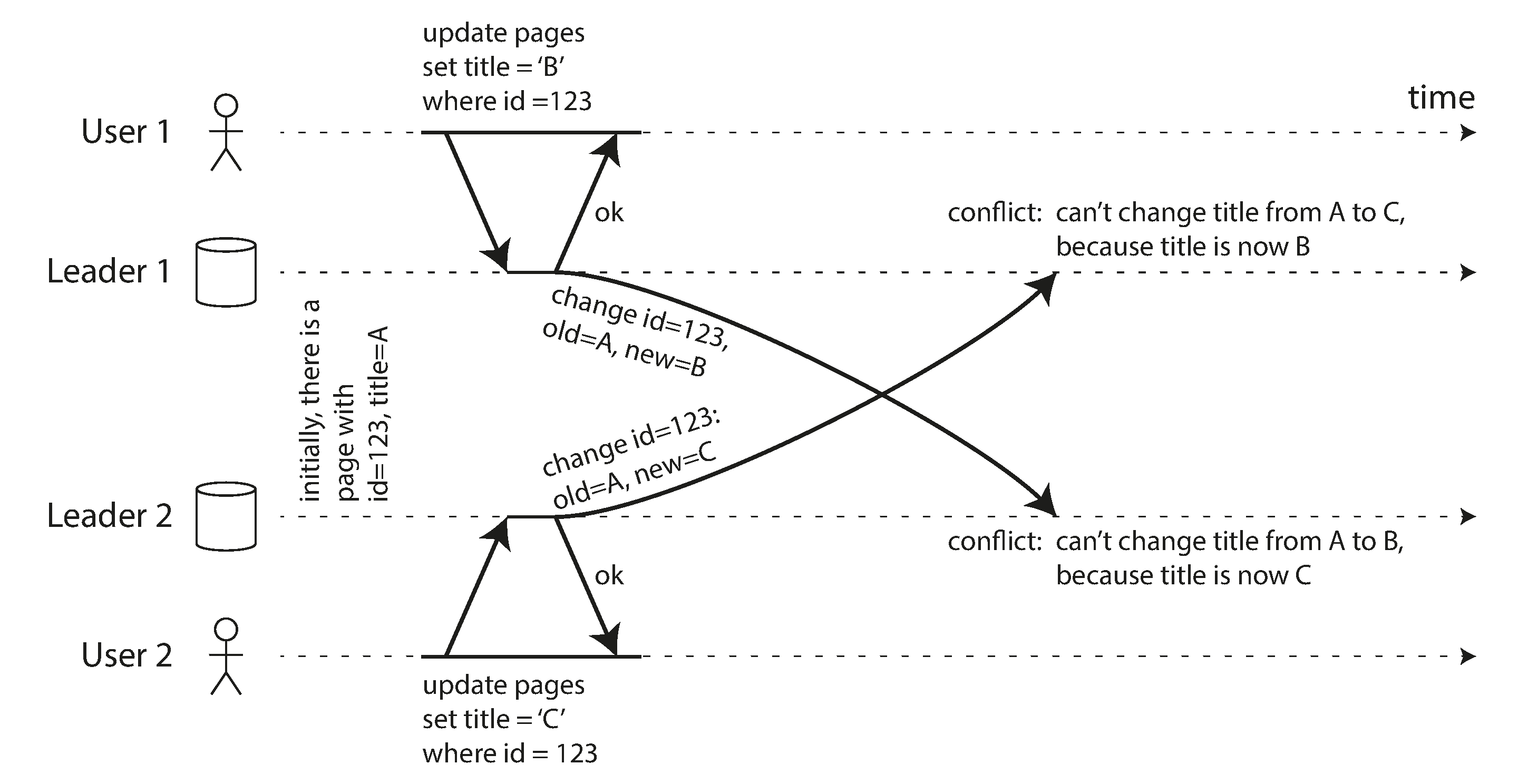 Conflict avoidance The simplest strategy for dealing with conflicts is to avoid them: if the application can ensure that all writes for a particular record go through the same leader, then conflicts cannot occur. Since many implementations of multi-leader replication handle conflicts quite poorly, avoiding conflicts is a frequently recommended approach.

Custom conflict resolution logic
On write - As soon as the database system detects a conflict in the log of replicated changes, it calls the conflict handler. Bucardo. On read - When a conflict is detected, all the conflicting writes are stored. The next time the data is read, these multiple versions of the data are returned to the application. CouchDB

In circular and star topologies, a write may need to pass through several nodes before it reaches all replicas. Therefore, nodes need to forward data changes they receive from other nodes. To prevent infinite replication loops, each node is given a unique identifier, and in the replication log, each write is tagged with the identifiers of all the nodes it has passed through.

A problem with circular and star topologies is that if just one node fails, it can interrupt the flow of replication messages between other nodes, causing them to be unable to communicate until the node is fixed.

The fault tolerance of a more densely connected topology (such as all-to-all) is better because it allows messages to travel along different paths, avoiding a single point of failure.

On the other hand, all-to-all topologies can have issues too. In particular, some network links may be faster than others (e.g., due to network congestion), with the result that some replication messages may “overtake” others. 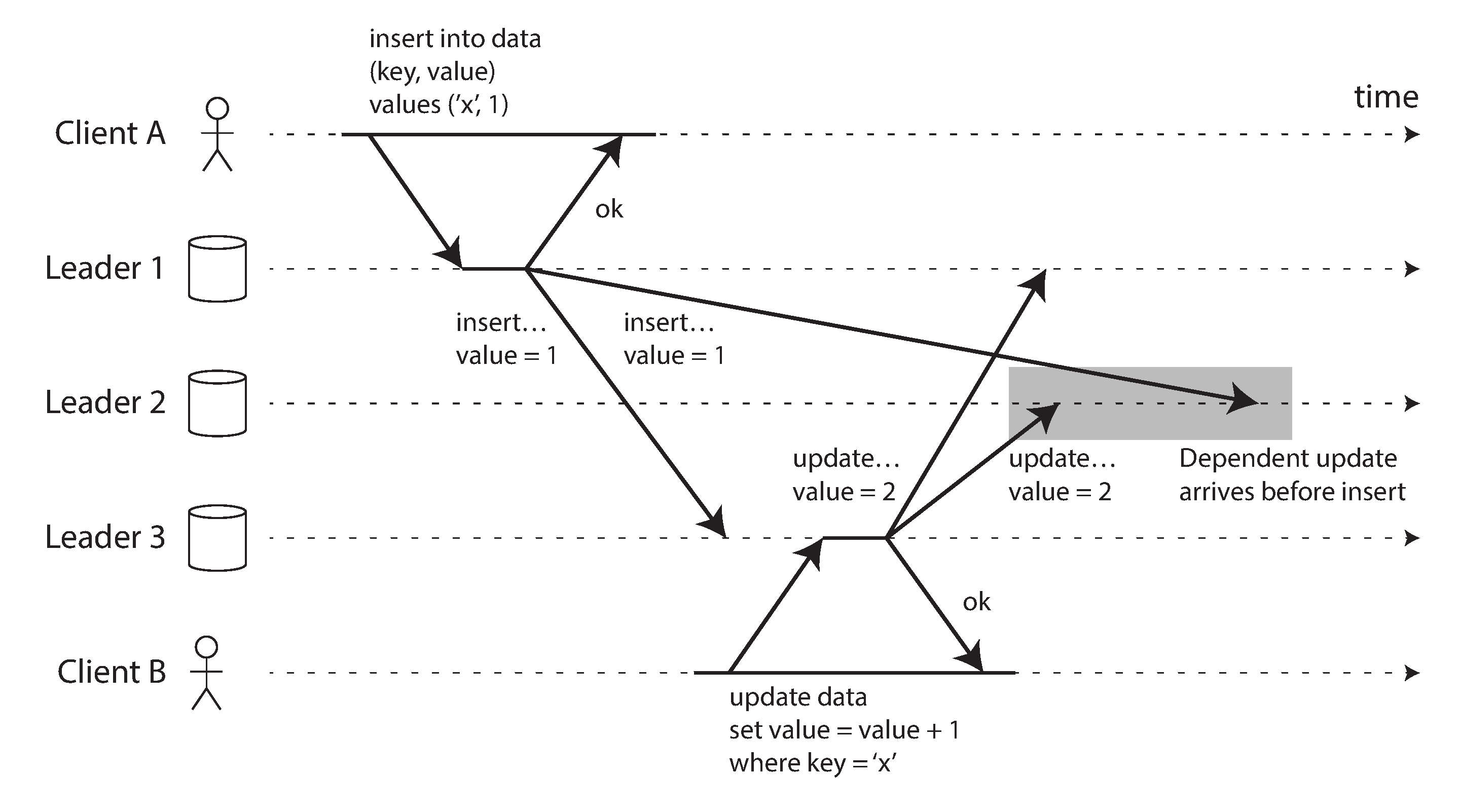 allowing any replica to directly accept writes from clients. Some of the earliest replicated data systems were leaderless.

It once again became a fashionable architecture for databases after Amazon used it for its in-house Dynamo system. vi Riak, Cassandra, and Voldemort are open source datastores with leaderless replication models inspired by Dynamo, so this kind of database is also known as Dynamo-style.

In some leaderless implementations, the client directly sends its writes to several replicas, while in others, a coordinator node does this on behalf of the client. However, unlike a leader database, that coordinator does not enforce a particular ordering of writes. 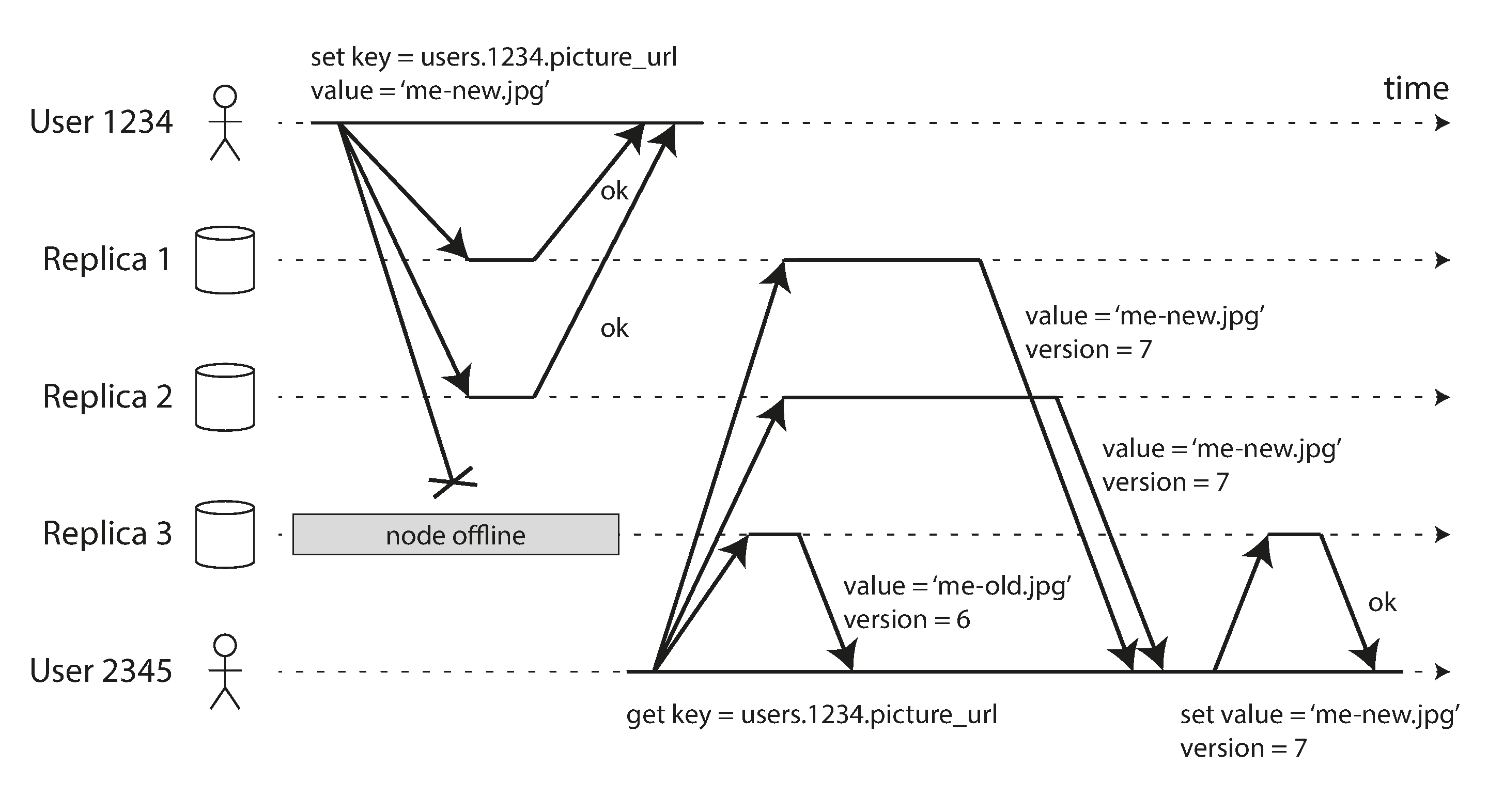 without an anti-entropy process, values that are rarely read may be missing from some replicas and thus have reduced durability.

quorum reads and writes if there are n replicas, every write must be confirmed by w nodes to be considered successful, and we must query at least r nodes for each read. (In our example, n = 3, w = 2, r = 2.) As long as w + r > n, we expect to get an up-to-date value when reading, because at least one of the r nodes we’re reading from must be up to date.

The parameters w and r allow you to adjust the probability of stale values being read, but it’s wise to not take them as absolute guarantees.

For leader-based replication, the database typically exposes metrics for the replication lag.

with leaderless replication, there is no fixed order in which writes are applied, which makes monitoring more difficult.

try predicting the expected percentage of stale reads depending on the parameters n, w, and r?

Eventual consistency is a deliberately vague guarantee, but for operability it’s important to be able to quantify “eventual.”

Leaderless replication is also suitable for multi-datacenter operation, since it is designed to tolerate conflicting concurrent writes, network interruptions, and latency spikes. 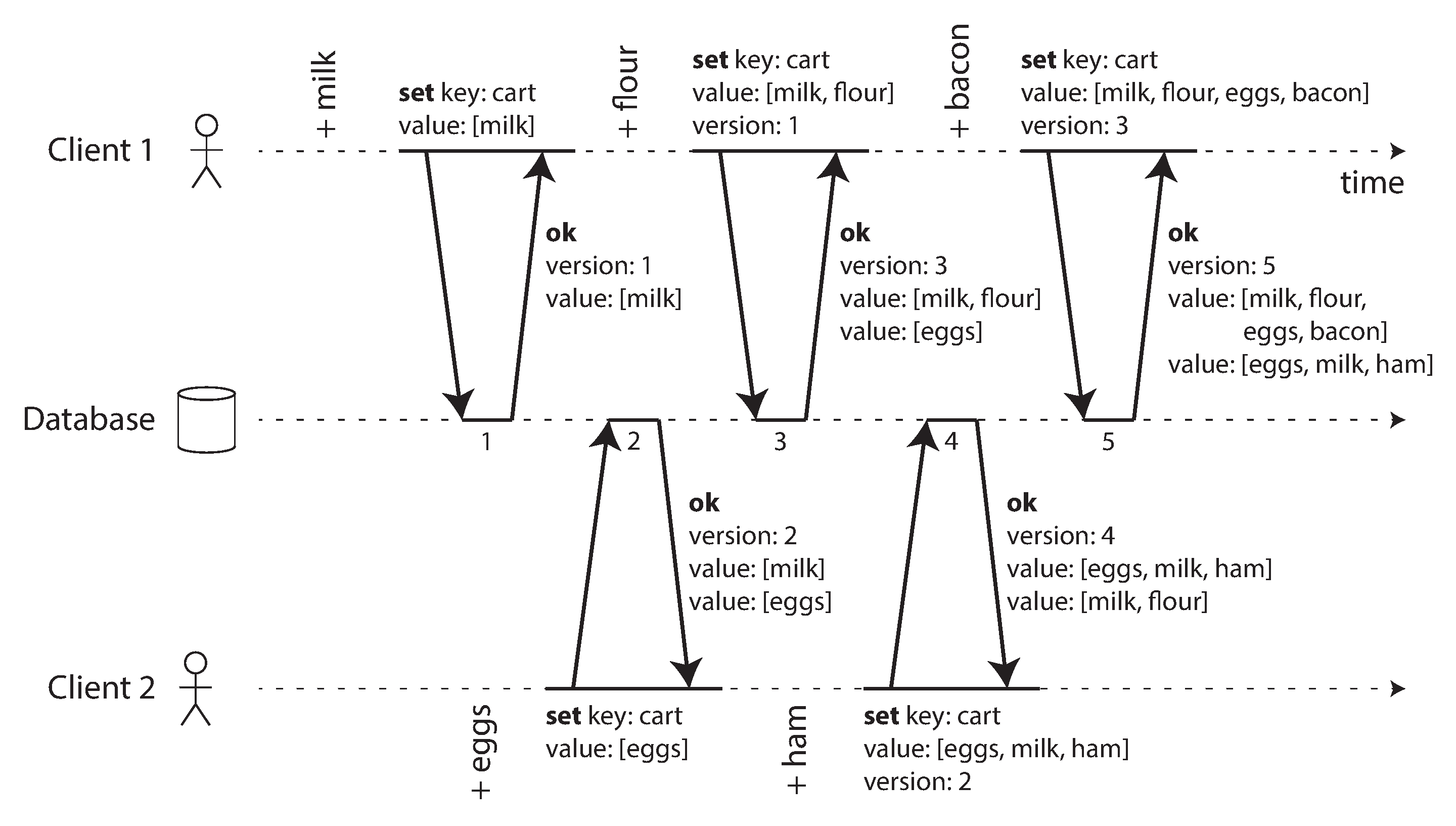