Chapter 1: Scale From Zero to Millions of Users

Designing a system that supports millions of users is challenging, and it is a journey that requires continuous refinement and endless improvement. In this chapter, we build a system that supports a single user and gradually scale it up to serve millions of users. After reading this chapter, you will master a handful of techniques that will help you to crack the system design interview questions. 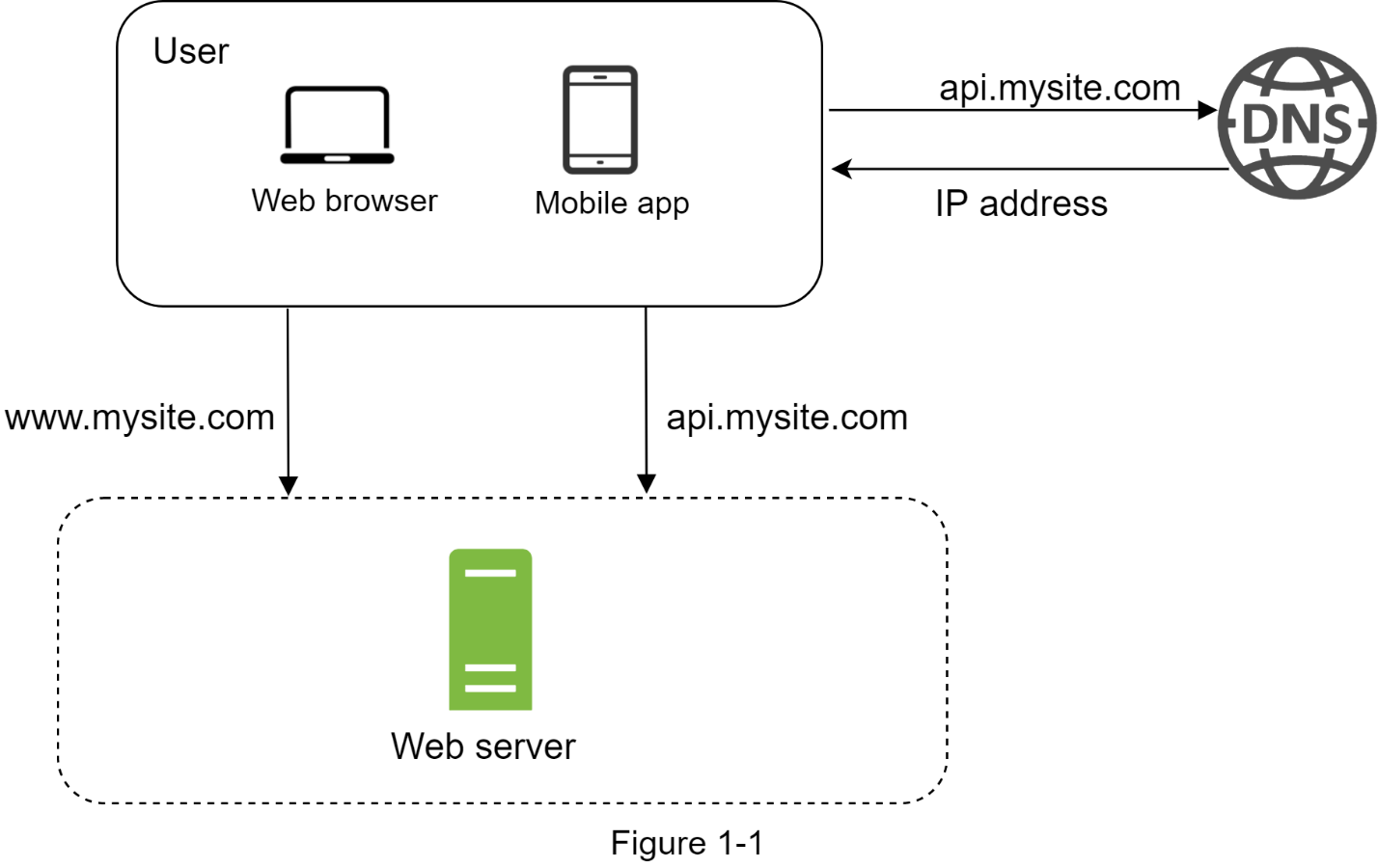 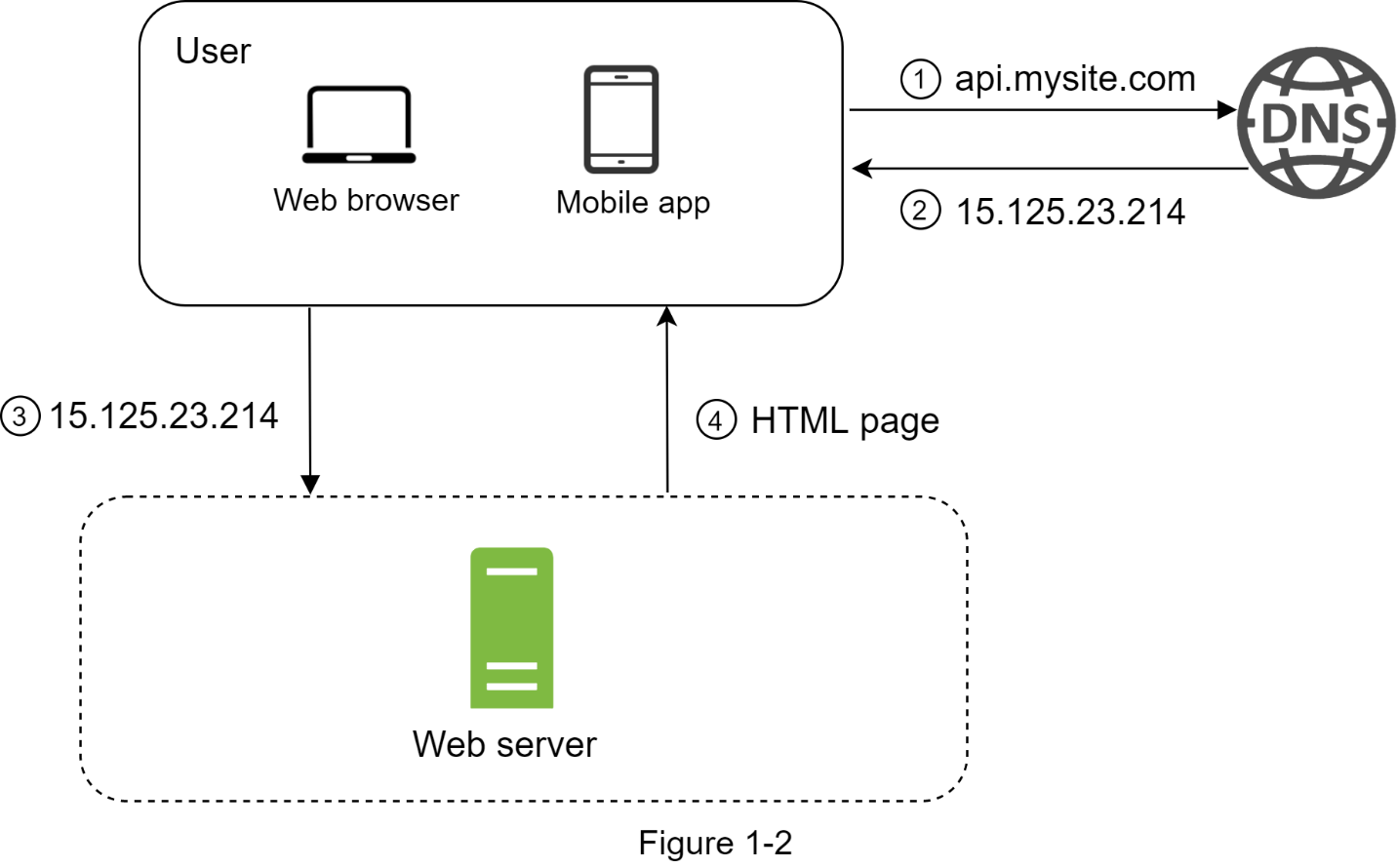 Next, let us examine the traffic source. The traffic to your web server comes from two sources: web application and mobile application.

With the growth of the user base, one server is not enough, and we need multiple servers: one for web/mobile traffic, the other for the database (Figure 1-3). Separating web/mobile traffic (web tier) and database (data tier) servers allows them to be scaled independently. 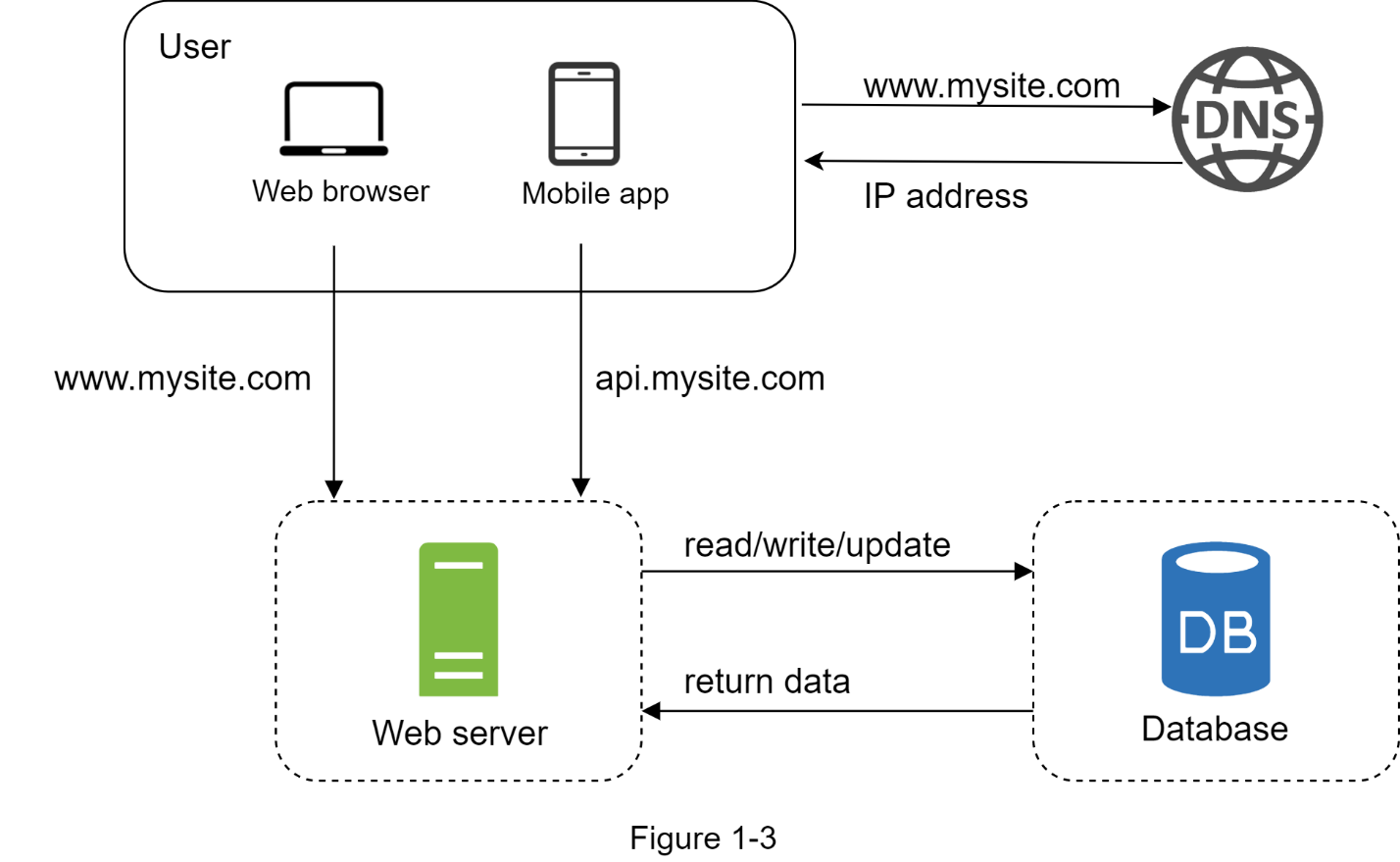 Which databases to use?

Horizontal scaling is more desirable for large scale applications due to the limitations of vertical scaling.
In the previous design, users are connected to the web server directly. Users will be unable to access the website if the web server is offline. In another scenario, if many users access the web server simultaneously and it reaches the web server’s load limit, users generally experience slower response or fail to connect to the server. A load balancer is the best technique to address these problems.

A load balancer evenly distributes incoming traffic among web servers that are defined in a load-balanced set. Figure 1-4 shows how a load balancer works. 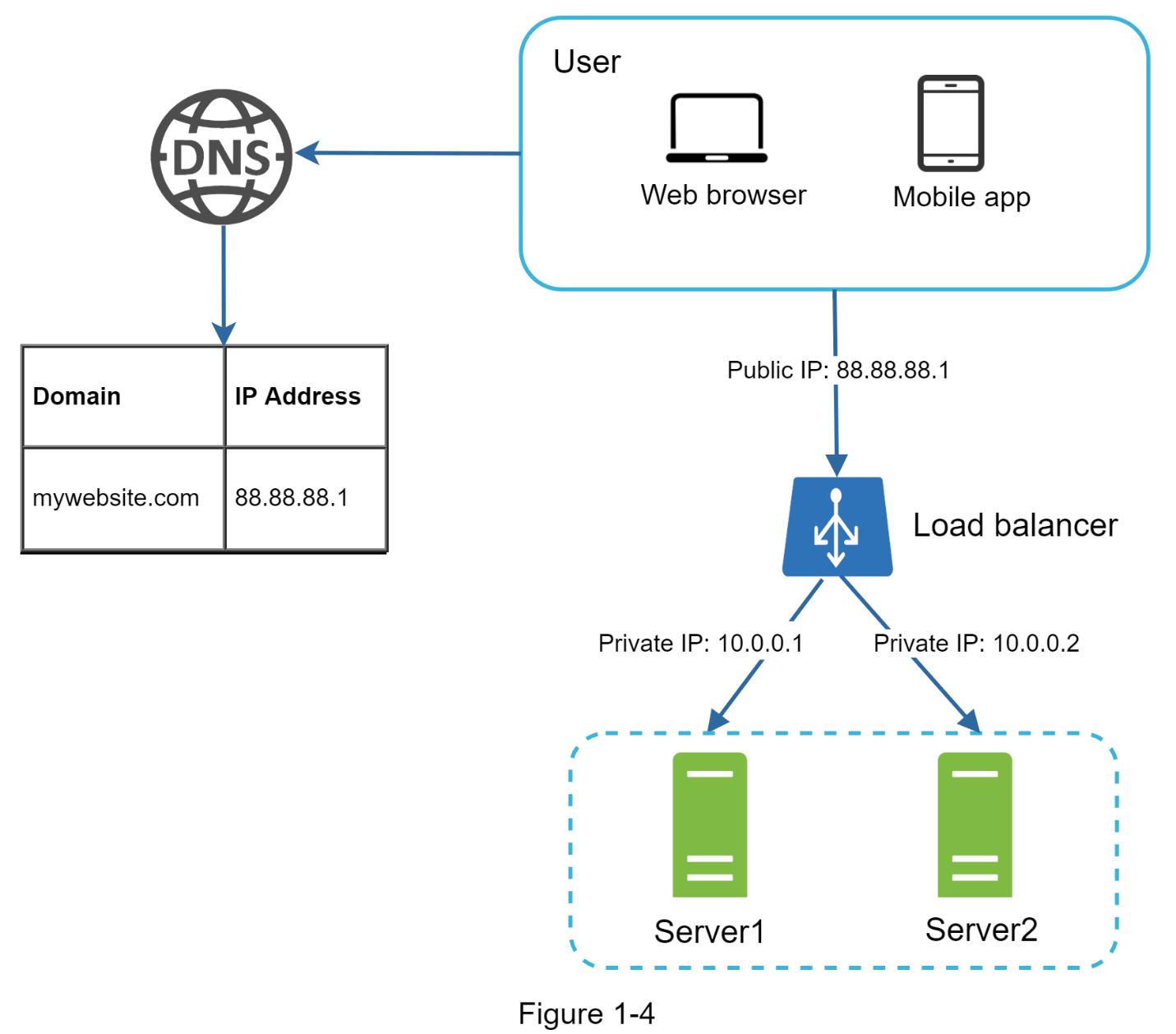 As shown in Figure 1-4, users connect to the public IP of the load balancer directly. With this setup, web servers are unreachable directly by clients anymore. For better security, private IPs are used for communication between servers. A private IP is an IP address reachable only between servers in the same network; however, it is unreachable over the internet. The load balancer communicates with web servers through private IPs.

In Figure 1-4, after a load balancer and a second web server are added, we successfully solved no failover issue and improved the availability of the web tier. Details are explained below:

Now the web tier looks good, what about the data tier? The current design has one database, so it does not support failover and redundancy. Database replication is a common technique to address those problems. Let us take a look. to read: l4 load balancer vs l7 load balancer to read: stateless/stateful connections and Websockets

Database replication can be used in many database management systems, usually with a leader/follower relationship between the original and the copies” . 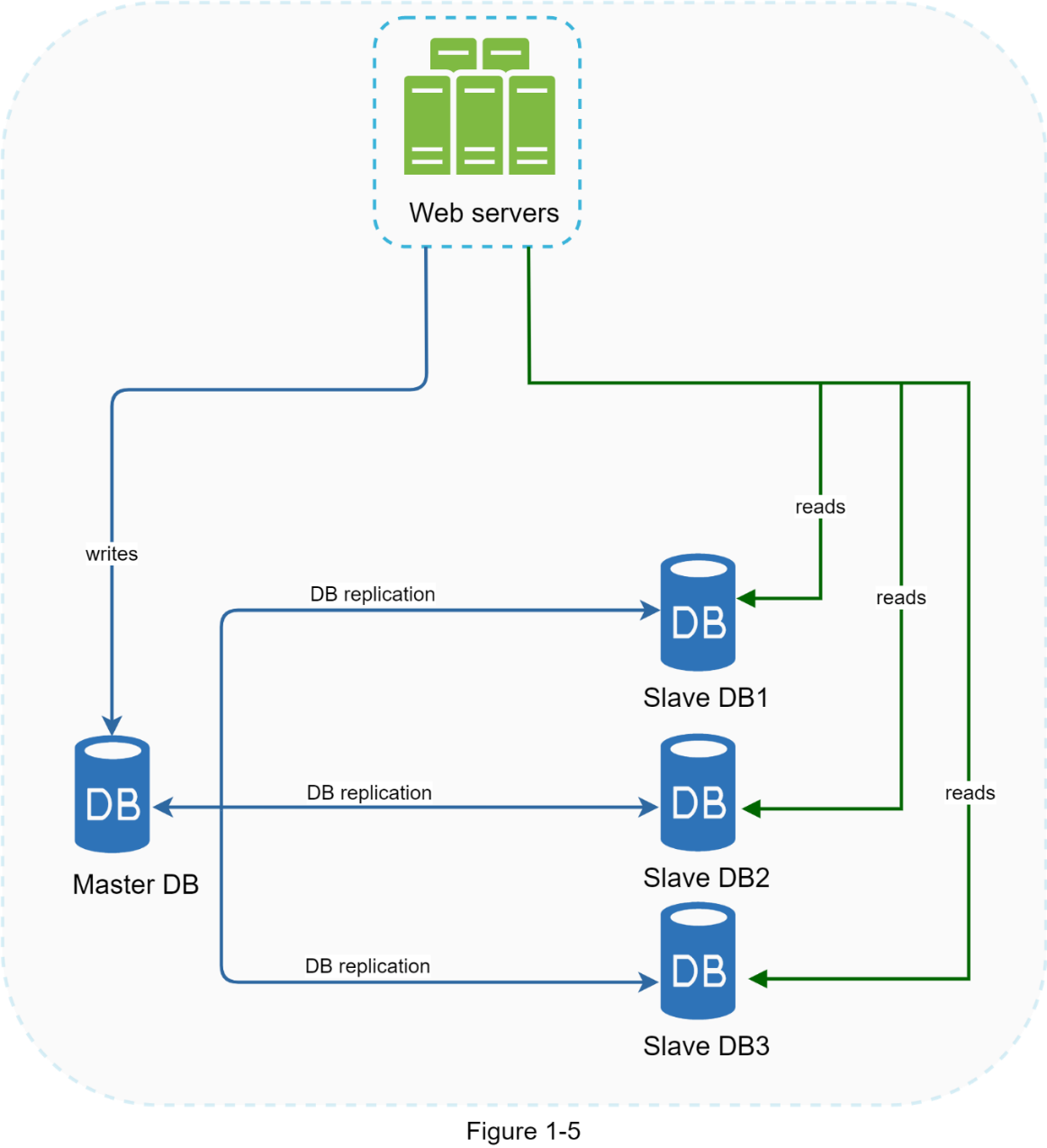 In the previous section, we discussed how a load balancer helped to improve system availability. We ask the same question here: what if one of the databases goes offline? The architectural design discussed in Figure 1-5 can handle this case:

In production systems, promoting a new follower is more complicated as the data in a follower database might not be up to date. The missing data needs to be updated by running data recovery scripts. Although some other replication methods like multi-leaders and circular replication could help, those setups are more complicated; and their discussions are beyond the scope of this course. Interested readers should refer to the listed [reference materials][4,5]. Figure 1-6 shows the system design after adding the load balancer and database replication. 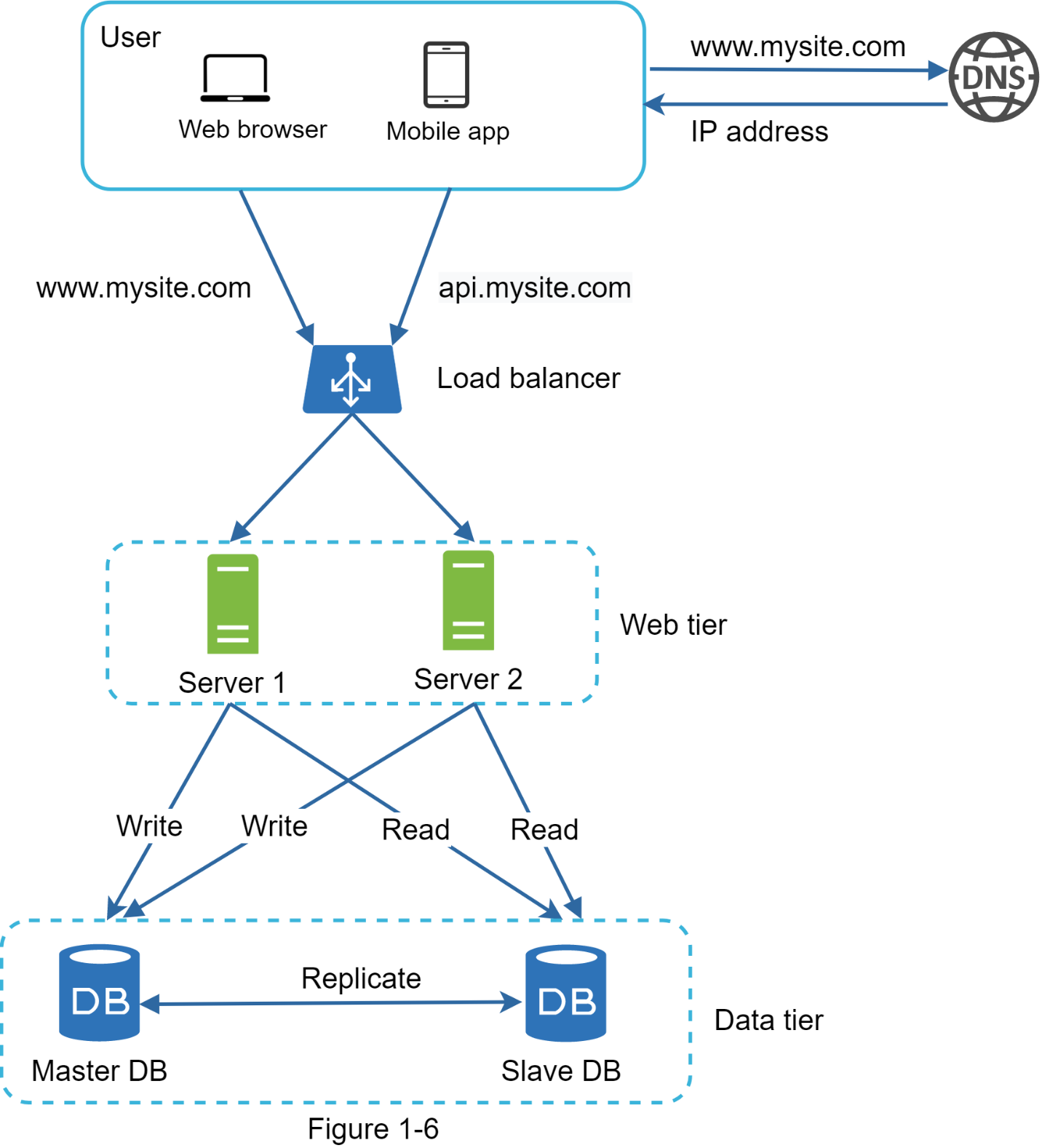 Let us take a look at the design:

Now, you have a solid understanding of the web and data tiers, it is time to improve the load/response time. This can be done by adding a cache layer and shifting static content (JavaScript/CSS/image/video files) to the content delivery network (CDN).

A cache is a temporary storage area that stores the result of expensive responses or frequently accessed data in memory so that subsequent requests are served more quickly. As illustrated in Figure 1-6, every time a new web page loads, one or more database calls are executed to fetch data. The application performance is greatly affected by calling the database repeatedly. The cache can mitigate this problem.

The cache tier is a temporary data store layer, much faster than the database. The benefits of having a separate cache tier include:

Figure 1-7 shows a possible setup of a cache server:

After receiving a request, a web server first checks if the cache has the available response. If it has, it sends data back to the client. If not, it queries the database, stores the response in cache, and sends it back to the client. This caching strategy is called a read-through cache. Other caching strategies are available depending on the data type, size, and access patterns. A previous study explains how different caching strategies work . Difference between read-through and cache aside? Interacting with cache servers is simple because most cache servers provide APIs for common programming languages. The following code snippet shows typical Memcached APIs:

Here are a few considerations for using a cache system:

A CDN is a network of geographically dispersed servers used to deliver static content. CDN servers cache static content like images, videos, CSS, JavaScript files, etc.
Dynamic content caching is a relatively new concept and beyond the scope of this course. It enables the caching of HTML pages that are based on request path, query strings, cookies, and request headers. Refer to the article mentioned in reference material for more about this. This course focuses on how to use CDN to cache static content.
Here is how CDN works at the high-level: when a user visits a website, a CDN server closest to the user will deliver static content. Intuitively, the further users are from CDN servers, the slower the website loads. For example, if CDN servers are in San Francisco, users in Los Angeles will get content faster than users in Europe. Figure 1-9 is a great example that shows how CDN improves load time.

Considerations of using a CDN

Figure 1-11 shows the design after the CDN and cache are added.

CDN refers to geographically distributed servers to provide faster delivery of content. It caches content at the edge servers. It can cache images, videos, and static pages.

On the other hand, items stored in cache have a size limit. The limit is a lot smaller than CDN. For example, the size limit for Memcache is 1MB. Cache servers are usually located in data centers vs CDN servers are located in many more locations.

Now it is time to consider scaling the web tier horizontally. For this, we need to move state (for instance, user session data) out of the web tier. A good practice is to store session data in persistent storage such as relational databases or NoSQL. Each web server in the cluster can access state data from databases. This is called stateless web tier.

Stateful server and stateless server have some key differences.

Figure 1-12 shows an example of a stateful architecture. 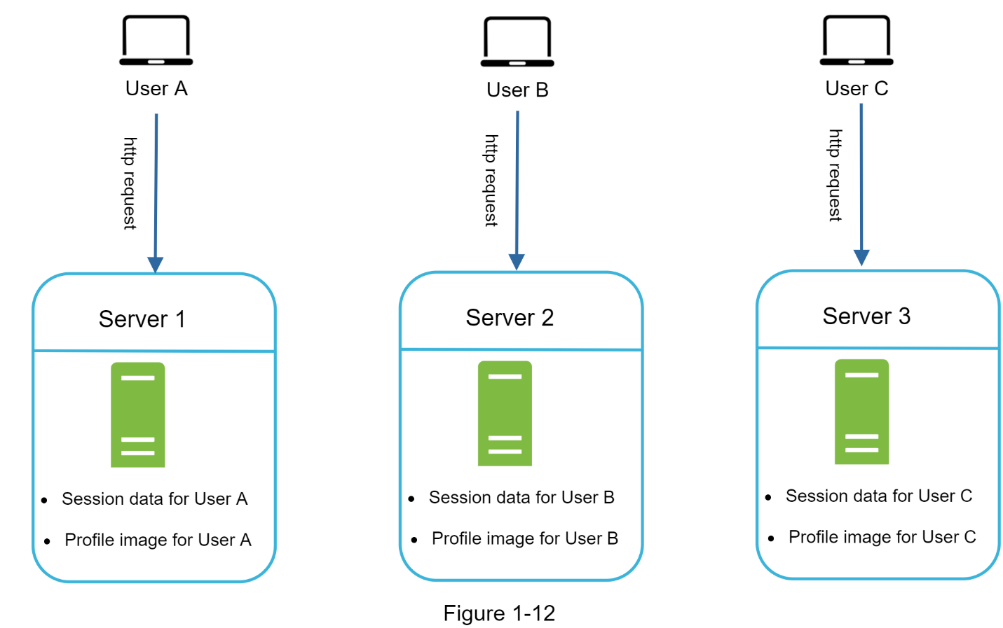 In Figure 1-12, user A’s session data and profile image are stored in Server 1. To authenticate User A, HTTP requests must be routed to Server 1. If a request is sent to other servers like Server 2, authentication would fail because Server 2 does not contain User A’s session data. Similarly, all HTTP requests from User B must be routed to Server 2; all requests from User C must be sent to Server 3.

The issue is that every request from the same client must be routed to the same server. This can be done with sticky sessions in most load balancers; however, this adds the overhead. Adding or removing servers is much more difficult with this approach. It is also challenging to handle server failures. 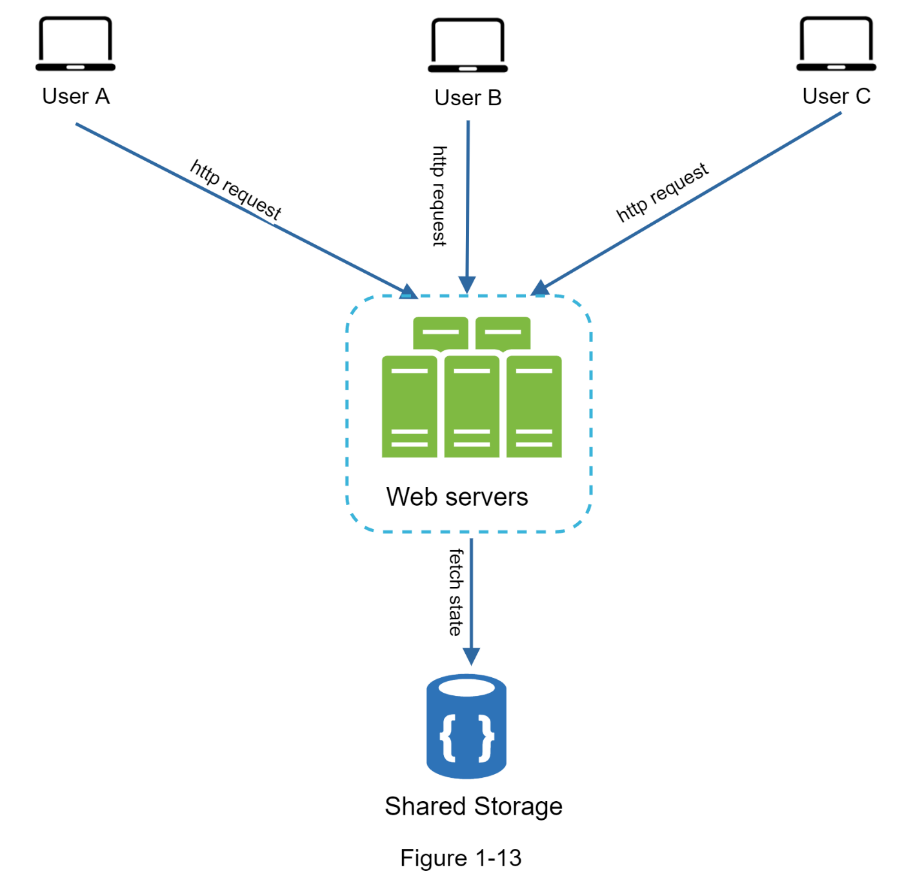 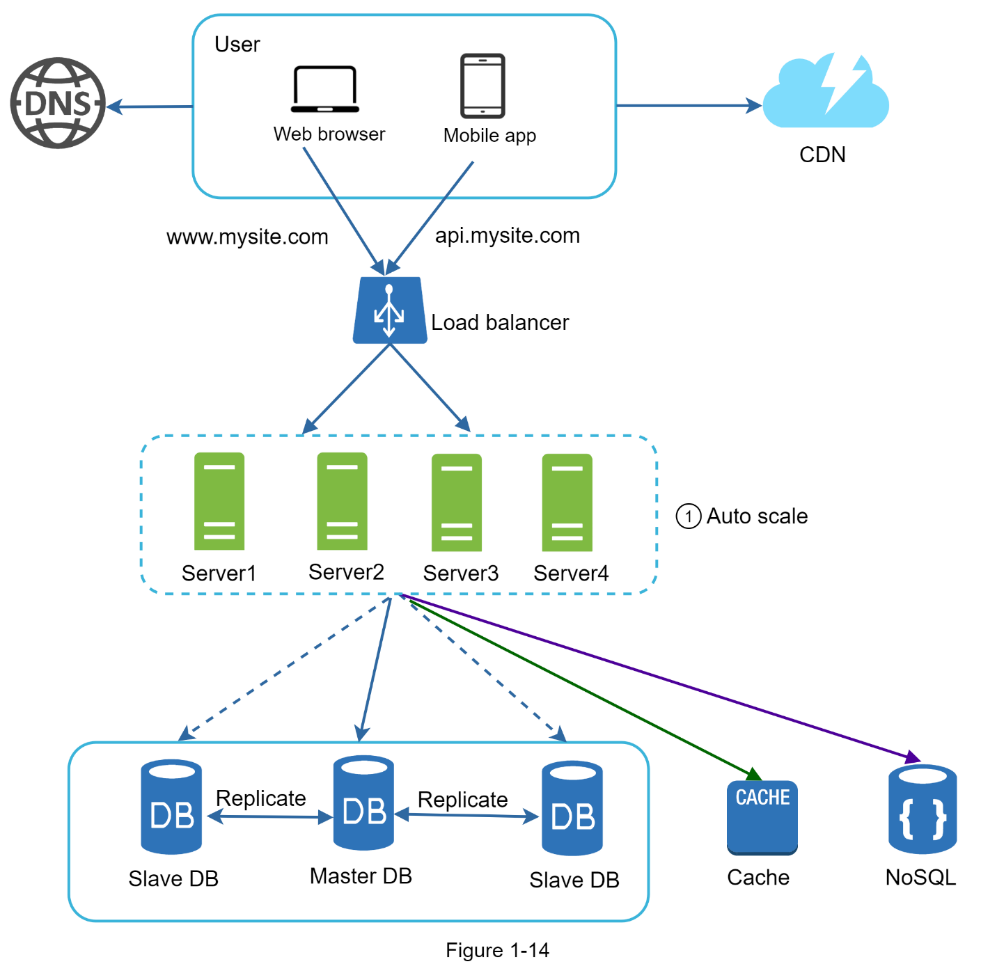 In Figure 1-14, we move the session data out of the web tier and store them in the persistent data store. The shared data store could be a relational database, Memcached/Redis, NoSQL, etc. The NoSQL data store is chosen as it is easy to scale. Autoscaling means adding or removing web servers automatically based on the traffic load. After the state data is moved out of web servers, auto-scaling of the web tier is easily achieved by adding or removing servers based on traffic load. Your website grows rapidly and attracts a significant number of users internationally. To improve availability and provide a better user experience across wider geographical areas, supporting multiple data centers is crucial.

Figure 1-15 shows an example setup with two data centers. In normal operation, users are geoDNS-routed, also known as geo-routed, to the closest data center, with a split traffic of x% in US-East and (100 – x)% in US-West. geoDNS is a DNS service that allows domain names to be resolved to IP addresses based on the location of a user. 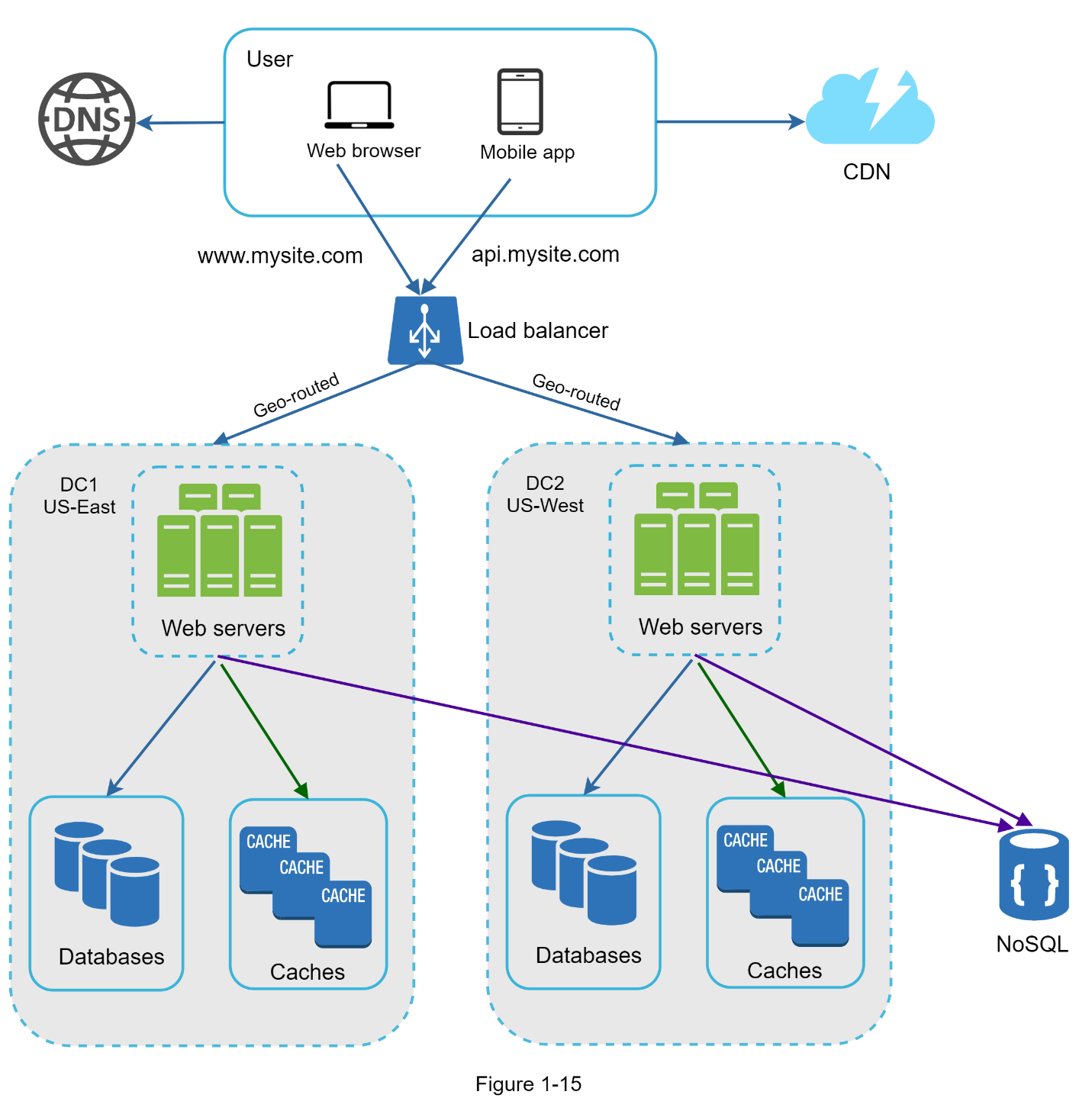 In the event of any significant data center outage, we direct all traffic to a healthy data center. In Figure 1-16, data center 2 (US-West) is offline, and 100% of the traffic is routed to data center 1 (US-East).

The diagram is likely not correct. DNS routing should happen with the DNS provider not with load balancer. DNS route user to the load balancer within the target geo data center. The NoSQL for state data is probably ok, if DC1 goes down, user going to DC2 is fine, as user state data is not in DC1. 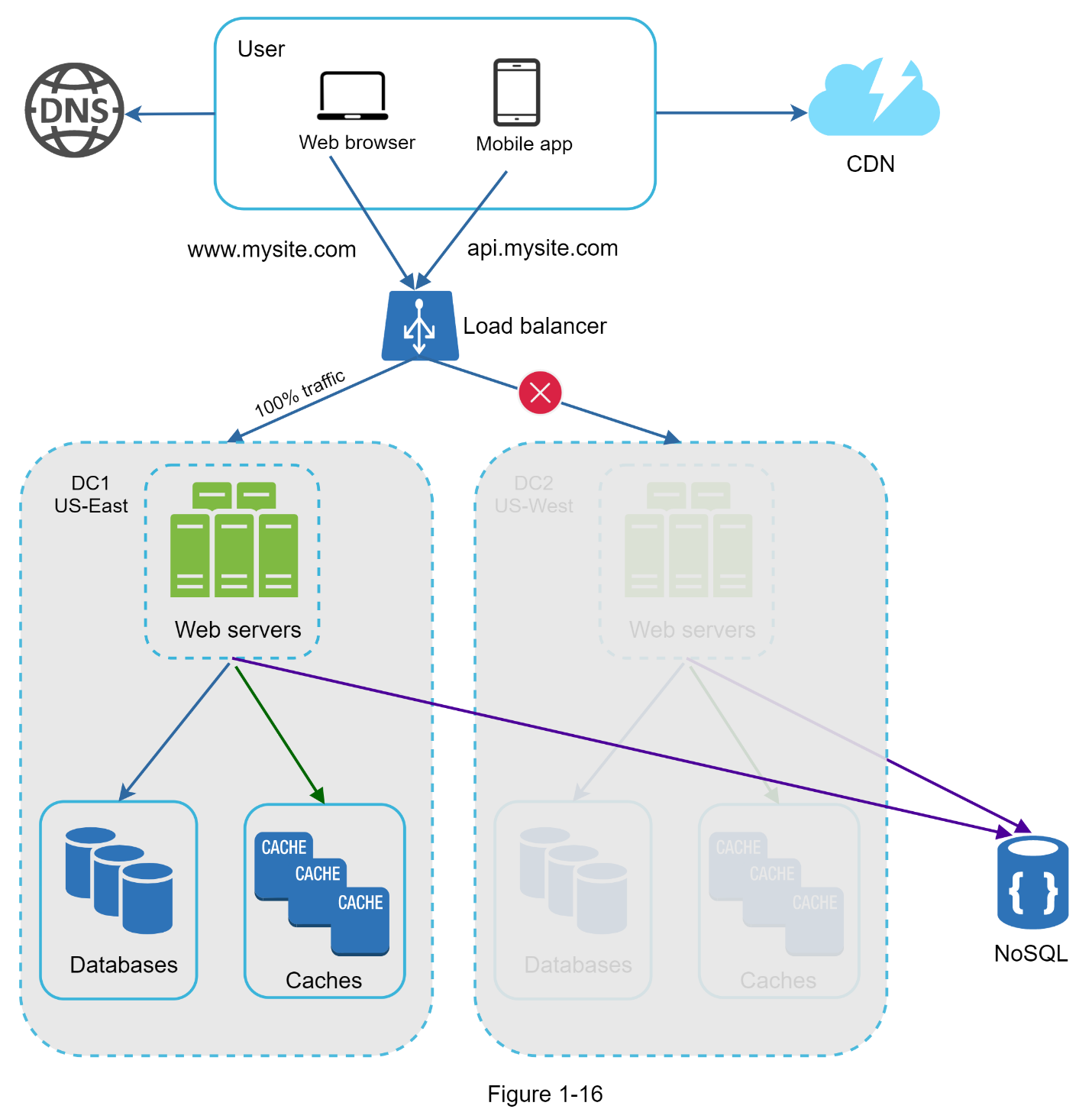 To further scale our system, we need to decouple different components of the system so they can be scaled independently. Messaging queue is a key strategy employed by many real-world distributed systems to solve this problem.

When working with a small website that runs on a few servers, logging, metrics, and automation support are good practices but not a necessity. However, now that your site has grown to serve a large business, investing in those tools is essential.

Figure 1-19 shows the updated design. Due to the space constraint, only one data center is shown in the figure. 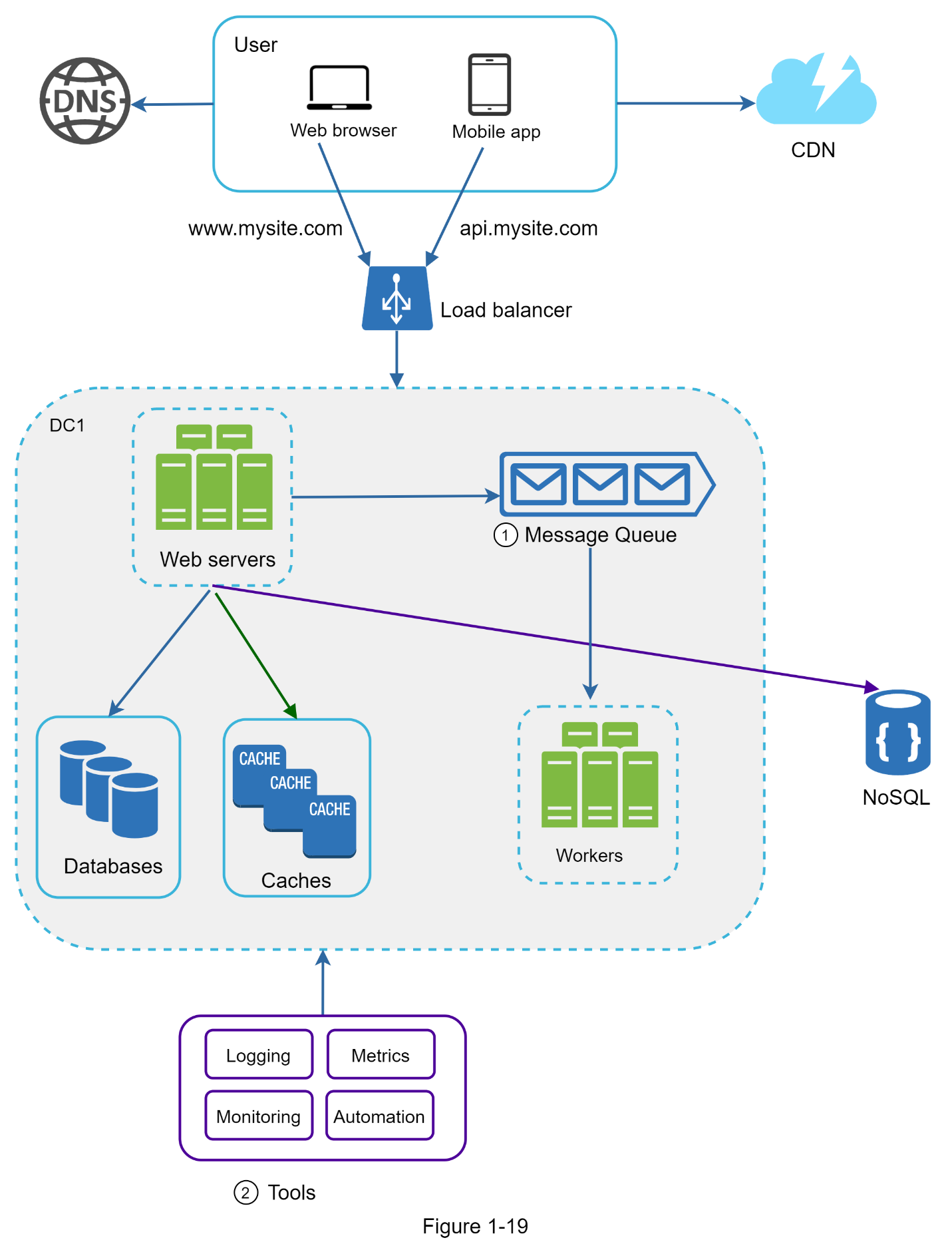 As the data grows every day, your database gets more overloaded. It is time to scale the data tier.

There are two broad approaches for database scaling: vertical scaling and horizontal scaling. 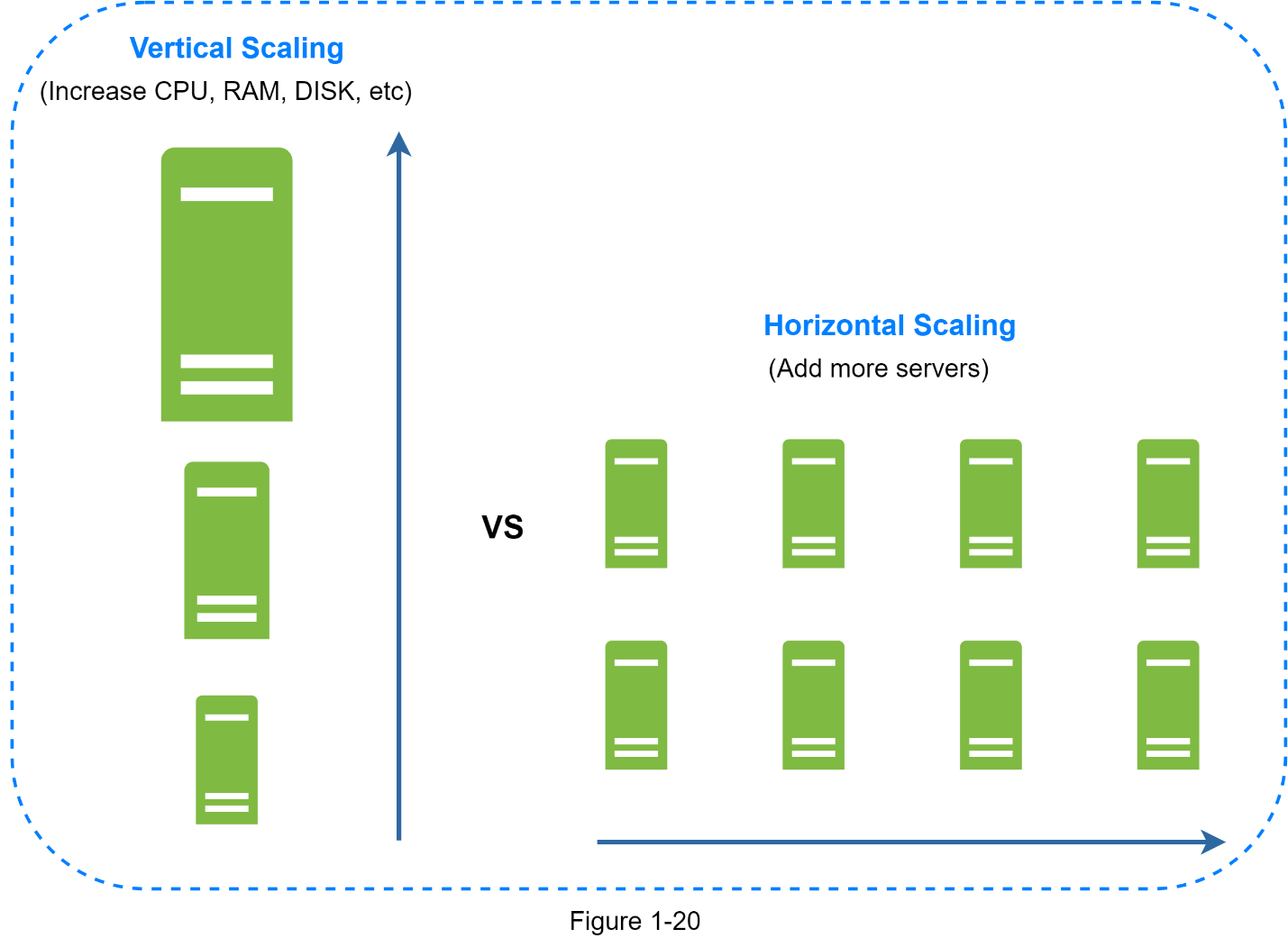 Sharding separates large databases into smaller, more easily managed parts called shards. Each shard shares the same schema, though the actual data on each shard is unique to the shard. Figure 1-21 shows an example of sharded databases. User data is allocated to a database server based on user IDs. Anytime you access data, a hash function is used to find the corresponding shard. In our example, user_id % 4 is used as the hash function. If the result equals to 0, shard 0 is used to store and fetch data. If the result equals 1, shard 1 is used. The same logic applies to other shards. 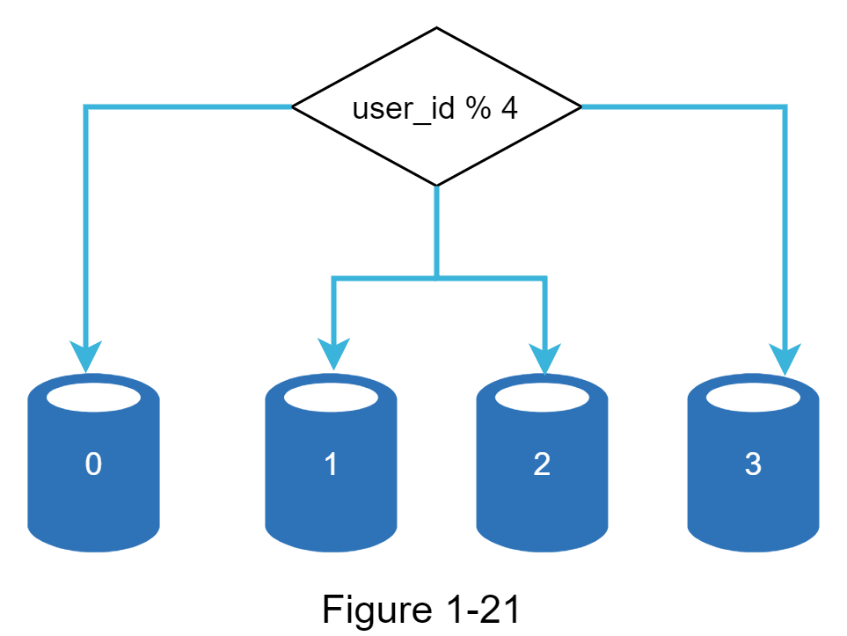 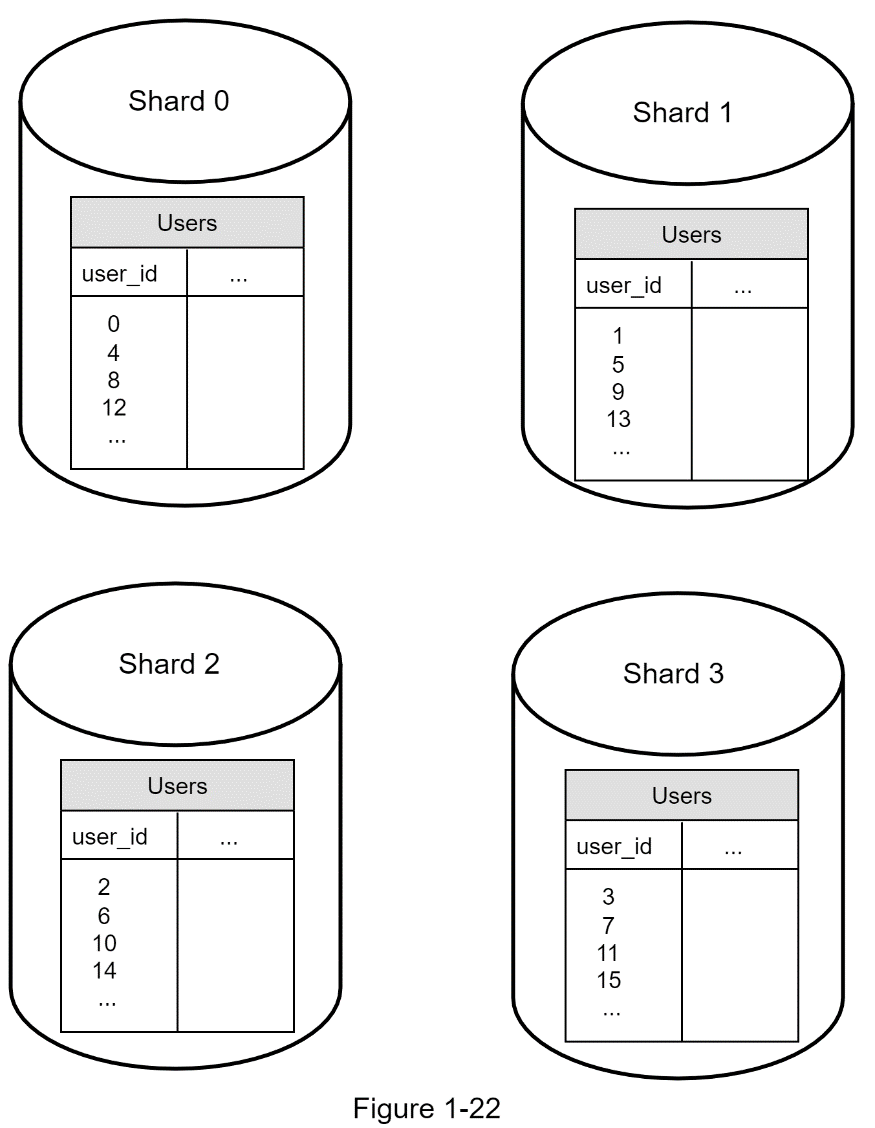 Sharding is a great technique to scale the database but it is far from a perfect solution. It introduces complexities and new challenges to the system:

Resharding data is needed when

When shard exhaustion happens, it requires updating the sharding function and moving data around. Consistent hashing, which will be discussed in Chapter 5, is a commonly used technique to solve this problem.

This is also called a hotspot key problem. Excessive access to a specific shard could cause server overload. Imagine data for Katy Perry, Justin Bieber, and Lady Gaga all end up on the same shard. For social applications, that shard will be overwhelmed with read operations. To solve this problem, we may need to allocate a shard for each celebrity. Each shard might even require further partition.

Once a database has been sharded across multiple servers, it is hard to perform join operations across database shards. A common workaround is to de-normalize the database so that queries can be performed in a single table. In Figure 1-23, we shard databases to support rapidly increasing data traffic. At the same time, some of the non-relational functionalities are moved to a NoSQL data store to reduce the database load. Here is an article that covers many use cases of NoSQL.