In most cases, a change to an application’s features also requires a change to data that it stores.

When a data format or schema changes, a corresponding change to application code often needs to happen.

we need to maintain compatibility in both directions 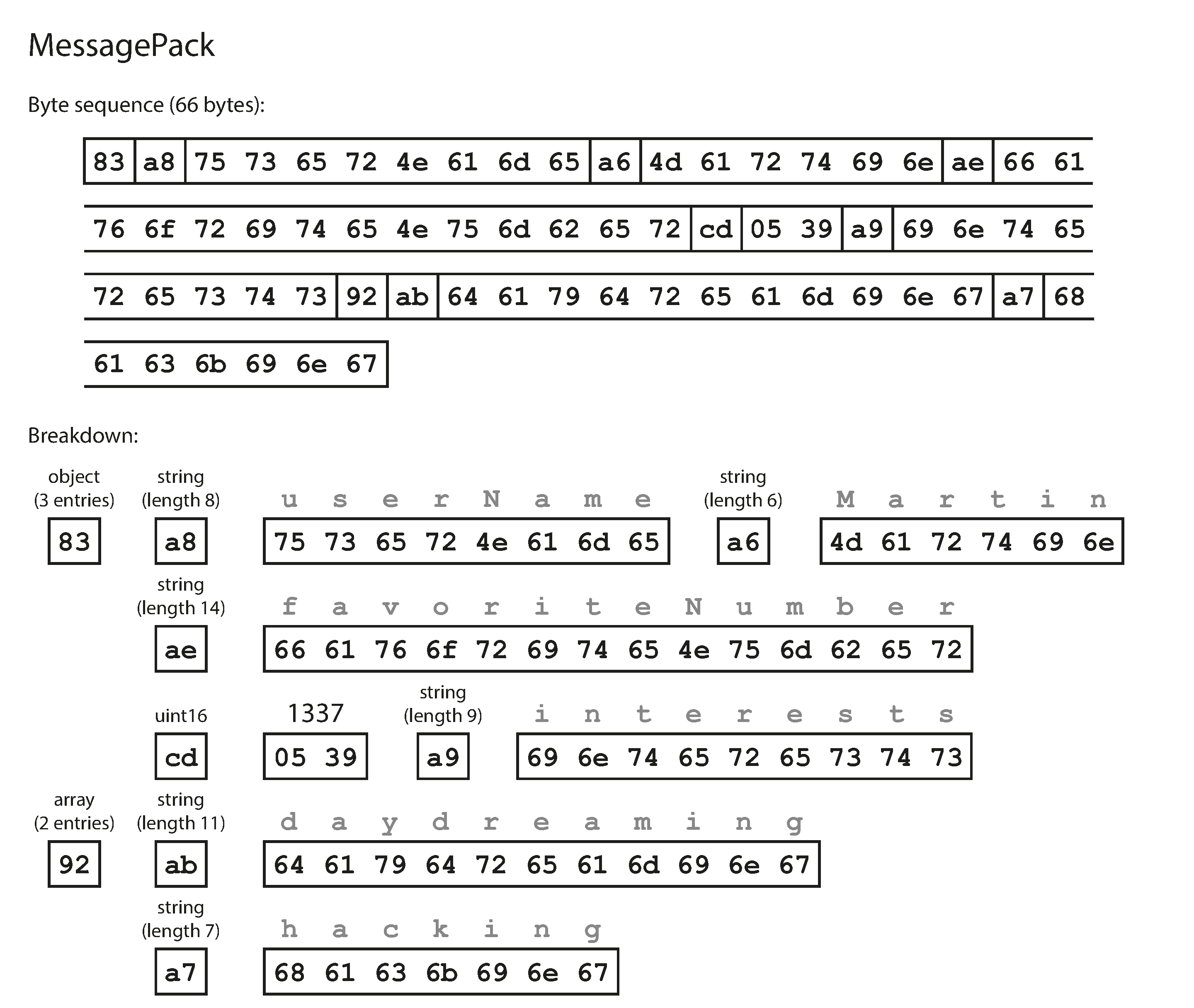 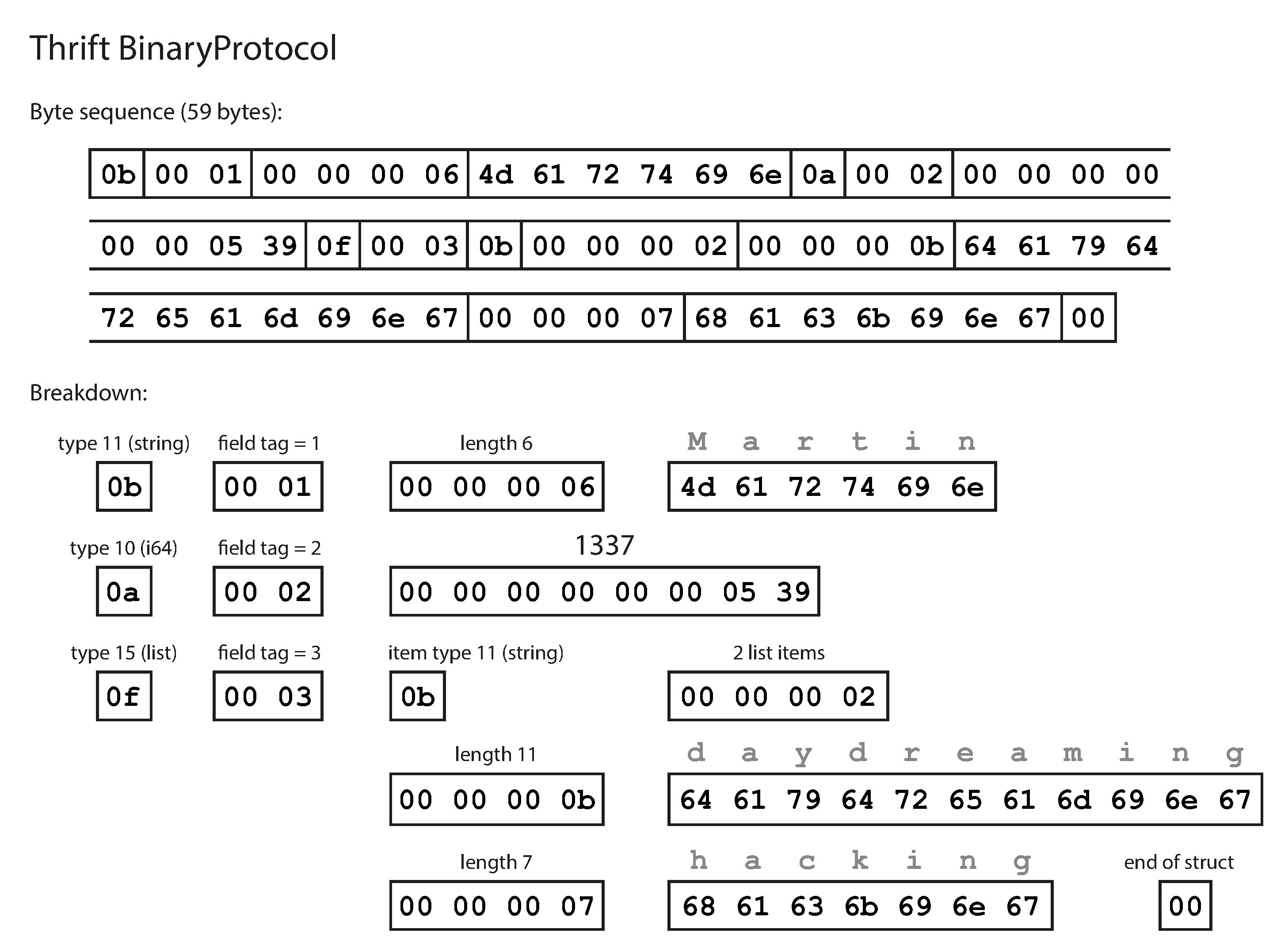 The big difference compared to messagepack is that there are no field names. Instead, the encoded data contains field tags which can be found in the schema definition. 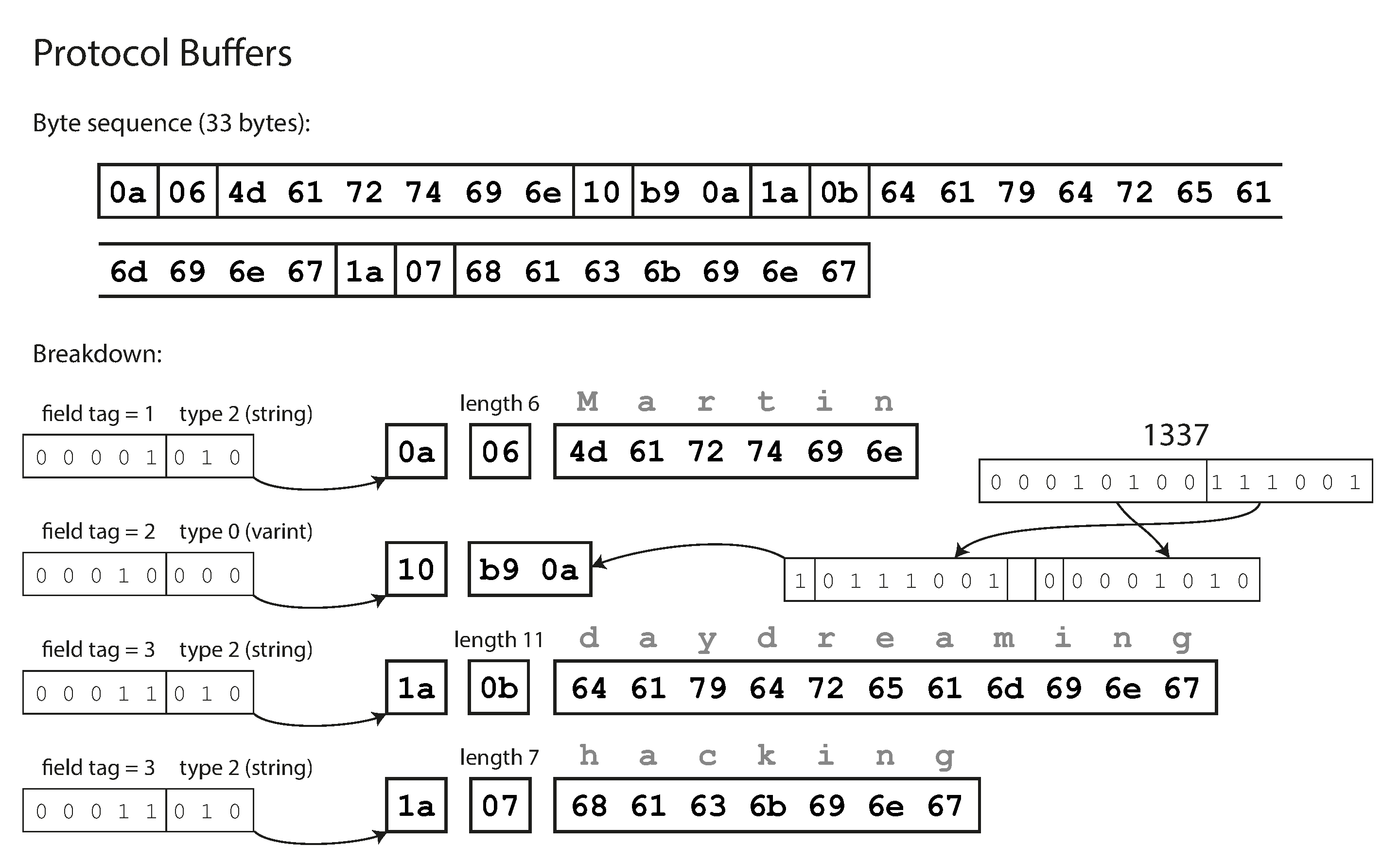 That may be possible—check the documentation for details—but there is a risk that values will lose precision or get truncated.

An example schema def in avro. 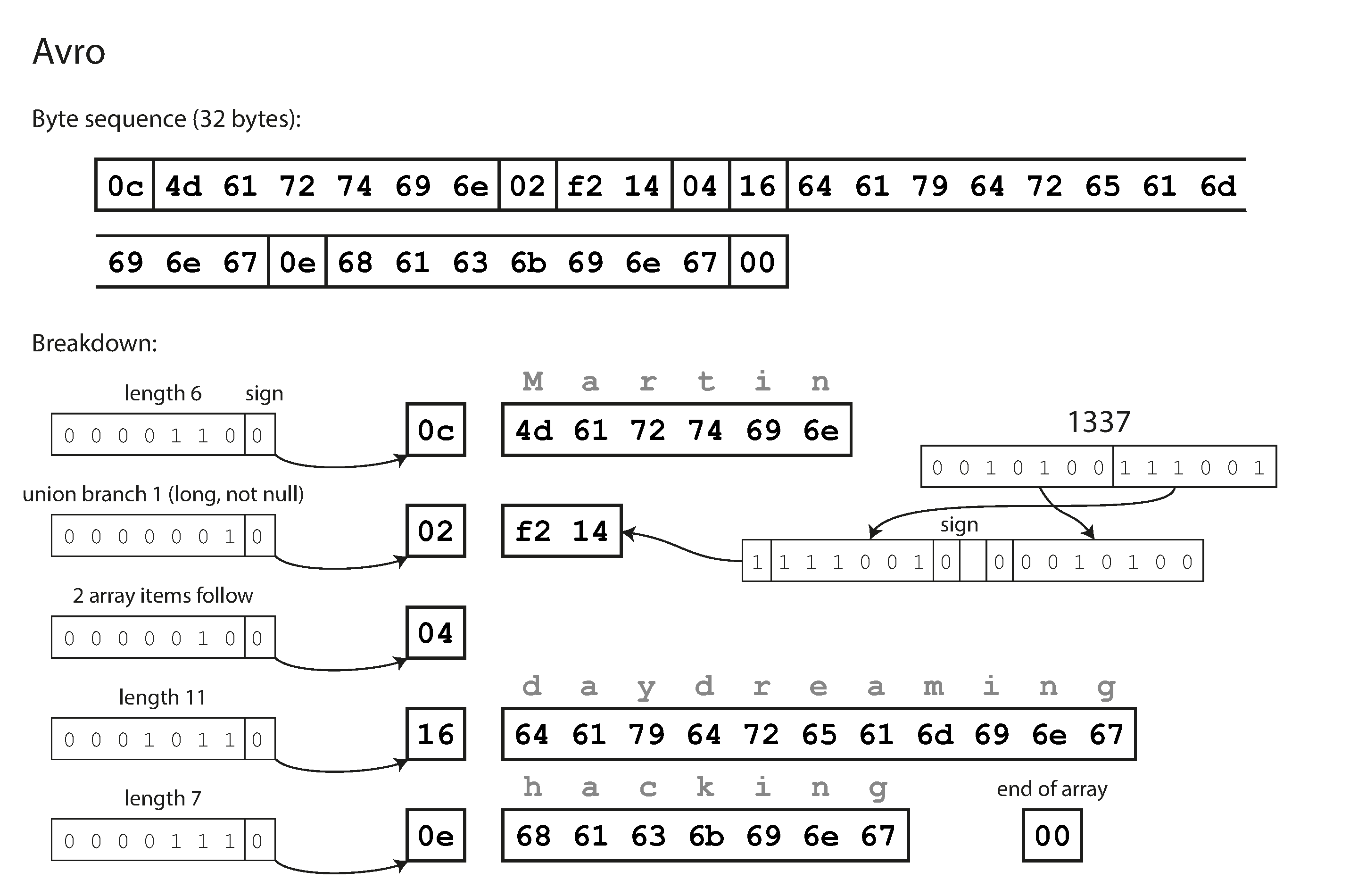 With Avro, when an application wants to encode some data (to write it to a file or database, to send it over the network, etc.), it encodes the data using whatever version of the schema it knows about—for example, that schema may be compiled into the application. This is known as the writer’s schema.

When an application wants to decode some data (read it from a file or database, receive it from the network, etc.), it is expecting the data to be in some schema, which is known as the reader’s schema.

The key idea with Avro is that the writer’s schema and the reader’s schema don’t have to be the same—they only need to be compatible.

If the code reading the data expects some field, but the writer’s schema does not contain a field of that name, it is filled in with a default value declared in the reader’s schema.

Say you have a relational database whose contents you want to dump to a file, and you want to use a binary format to avoid the aforementioned problems with textual formats (JSON, CSV, SQL). If you use Avro, you can fairly easily generate an Avro schema from the relational schema and encode the database contents using that schema, dumping it all to an Avro object container file.

You generate a record schema for each database table, and each column becomes a field in that record. The column name in the database maps to the field name in Avro.

If the database schema changes (for example, a table has one column added and one column removed), you can just generate a new Avro schema from the updated database schema and export data in the new Avro schema. Anyone who reads the new data files will see that the fields of the record have changed, but since the fields are identified by name, the updated writer’s schema can still be matched up with the old reader’s schema

If you have an object container file (which embeds the writer’s schema), you can simply open it using the Avro library and look at the data in the same way as you could look at a JSON file. The file is self-describing since it includes all the necessary metadata.

think of storing something in the database as sending a message to your future self. 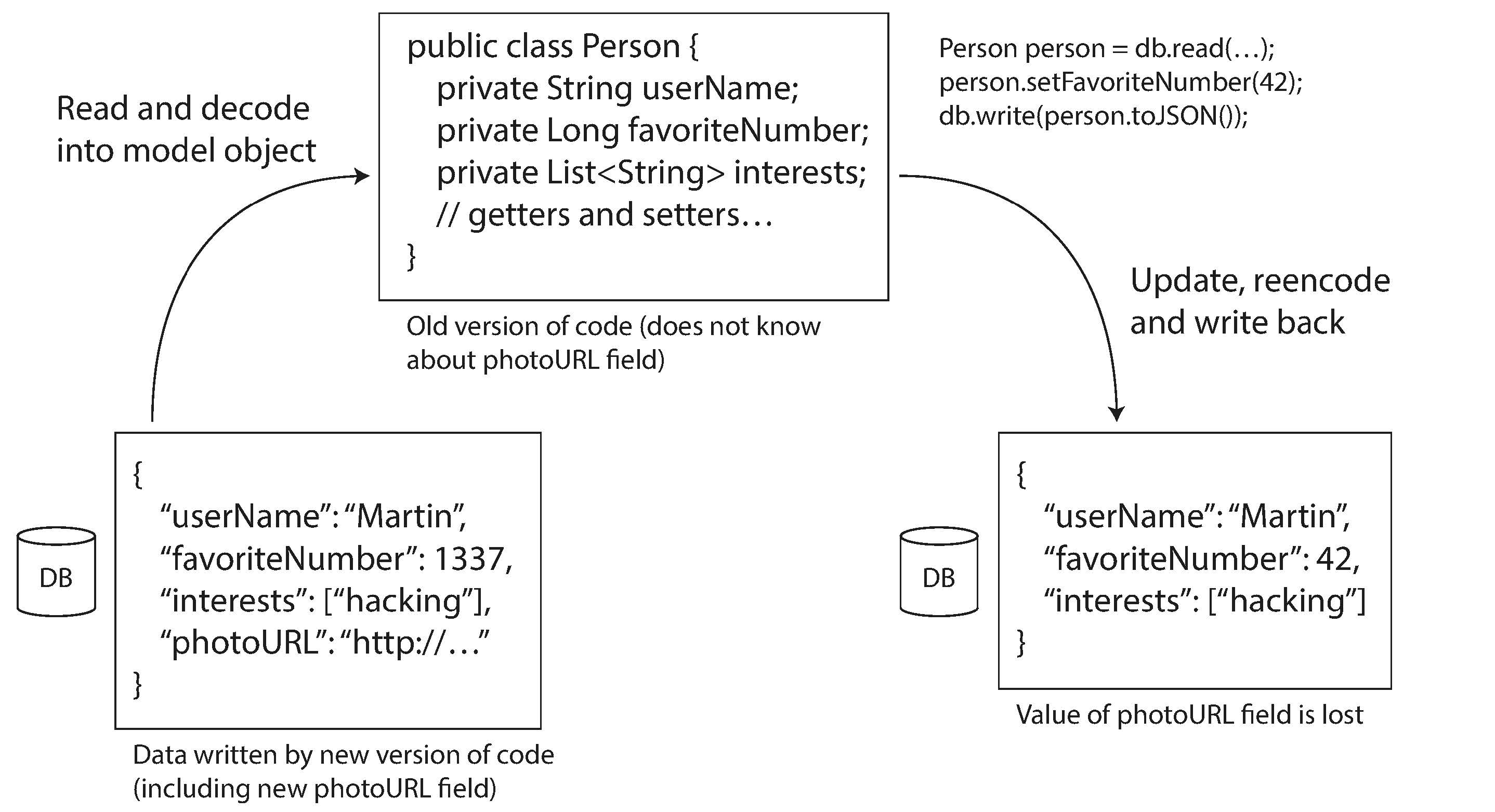 Dataflow Through Services: REST and RPC

Web services: When HTTP is used as the underlying protocol for talking to the service, it is called a web service. There are two popular approaches to web services: REST and SOAP.

Custom RPC protocols with a binary encoding format can achieve better performance than something generic like JSON over REST. However, a RESTful API has other significant advantages: it is good for experimentation and debugging.

Data encoding and evolution for RPC

asynchronous message-passing systems are somewhere between RPC and databases.

in general, message brokers are used as follows:

A distributed actor framework essentially integrates a message broker and the actor programming model into a single framework.